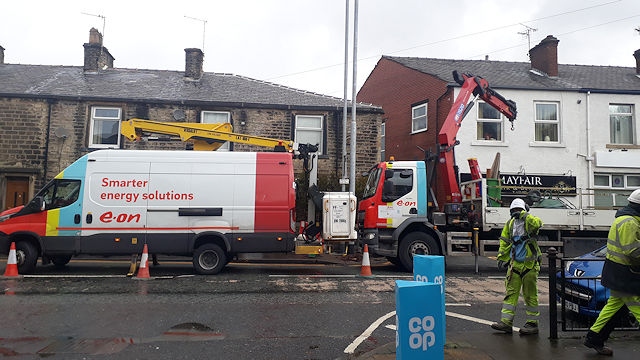 A monitored CCTV system has been installed in Norden village, as part of ongoing efforts to cut crime and anti-social behaviour.

The new CCTV system is located on Edenfield Road opposite Ashbourne Street and has been mounted on a newly installed, reinforced street lighting column with a brighter light.  It is positioned at height, giving it extended camera range and making it almost impossible to tamper with.

Initially planned as a standard camera, ward councillors sought support from the Community Safety Team at Rochdale Council and the Police to put forward a case for an upgraded system that would be monitored and linked to the existing network of cameras covering others parts of the borough.

The new camera has a range of functions including the ability for remote operators to direct and zoom the camera, along with high quality night vision allowing the village to be monitored 24/7. The range and location of the camera will mean that operators can view the whole of the village centre, including some side streets.

Councillor Peter Winkler, who first proposed the system, said: “A number of businesses in the village have been victims of crime and vandalism but existing cameras can only record footage to be viewed after the event.

“Not only is the new camera a massive deterrent but because it is monitored it means that we have a better chance of directing police to incidents if they occur.”

Councillor Jim Gartside added: “This project has taken a great deal of planning as we sought the full backing of the council, police and area forum. We had to make sure that we got the best system possible, but also that it was located to give the most effective coverage of the village and that it complies with all the necessary data protection regulations.”

Businesses are very pleased to see the installation too. Speaking about the new camera, staff from the Co-op said that they had had more than their fair share of incidents over the past couple of years including robberies, break-ins after hours and shoplifting.

The the new camera should help to deter these in the future or at least help the police catch the culprits.