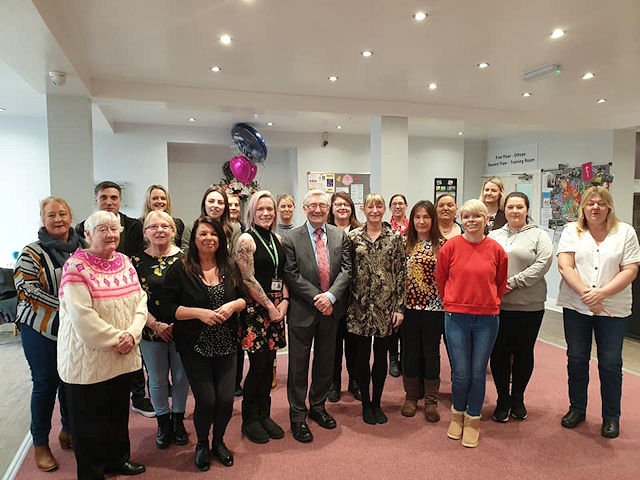 Rochdale Connections Trust participated in the One Billion Rising campaign on Friday 14 February.

One Billion Rising is a global mass action initiative that takes place on 14 February with the aim of highlighting that one in three women across the planet will be beaten or raped during her lifetime, equating to one billion women and girls.

The campaign theme this year was ‘Raise the Vibration; Rise for Revolution’ and involved staff and service users participating in the dance, regardless of ability, which was taking place in locations all around the world.

A total of 20 dancers and a further 15 people attended the Rochdale Connections Trust charity’s event to support the campaign and to help raise awareness in Rochdale.

Bev Place from Rochdale Connections Trust said: “As a Rochdale charity who work with females who are adversely affected by domestic violence and abuse we are keen to play our part and raise awareness of the scale of the violence that women and girls face.

“We have programmes operating in local secondary schools to raise awareness around healthy relationships, as we know education and early intervention is key to keeping girls safe. We are wholly committed to doing what we can in Rochdale and to contribute towards creating a world where violence is no longer acceptable.

“We were thrilled that our MP, Tony Lloyd was in attendance and provided an inspiring speech to rouse support for the women accessing our services.”

Rochdale Connections Trust was established in 1997 by a group of youth court magistrates, who had become increasingly concerned by the number of young people coming before them who had little or no family support.

Since then, RCT has evolved to include work with socially isolated adults and those with complex needs, whilst remaining highly committed to their original targeted youth support programme.

For more information about the range of services offered by Rochdale Connections Trust staff and volunteers visit the website: