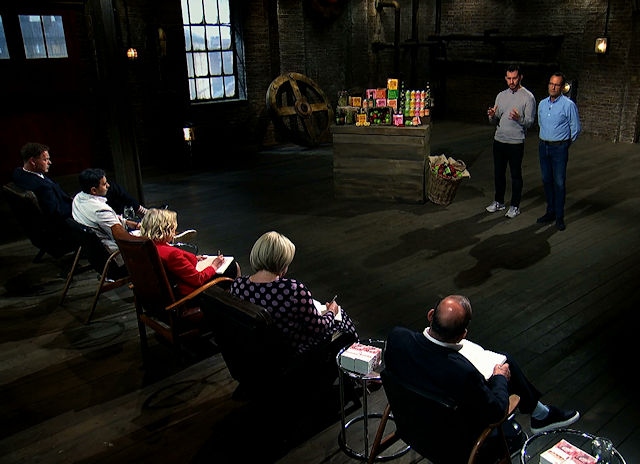 Founder and MD, Richard Clark and his UK Sales Director, Paul Briscoe, in the Dragons' Den

An alcohol-free drinks business founded in Rochdale has been awarded a £125,000 investment.

Appearing on Dragons’ Den on Sunday (8 March), Drynks Unlimited’s founder and MD, Richard Clark, and UK sales director, Paul Briscoe went in asking for £125,000 for a 5% stake in the rapidly growing 0% drinks business. There were some tense moments in the pitch, especially considering the size of the investment and the newcomer status of the business.

Both Sara Davies and Deborah Meaden saw potential in the innovative drinks business and Sara Davies made them an offer of £125,000 for 7.5% equity.

Richard and Paul retired to the back wall to deliberate, before accepting Sara Davies' offer.

Richard said being on Dragons’ Den was a "brilliant experience which really made me realise what a powerful story and proposition we have.”

He continued: “I am passionate about producing 0% drinks that taste as good as their alcoholic counterparts and that are genuinely sessionable. My aim is to get more people to start rethinking drinking.

“Having the chance to pitch to the Dragons was incredibly exciting, and a little bit nerve-wracking, but they know their stuff and the experience was invaluable. The experience in the Den really helped spur us on and resulted in us investing over £1m in our state-of-the-art cool vacuum distillation plant in Robinson's Brewery, in Stockport.”

The business was founded in 2017 by Richard Clark, who lived in Rochdale until earlier this year, after spotting an opportunity to develop a quality alternative to alcoholic drinks.

In true entrepreneurial style, Richard sold his house and car and invested a substantial amount of his savings into making his dream a reality.

Drynks Unlimited formally launched its Smashed range of 0% beers and cider in November 2019 and is the only UK drinks business to invest in a state-of-the-art cool vacuumed distillation kit which gently removes alcohol from full-strength drinks.

Smashed is now available in over 500 UK pubs, bars, restaurants, coffee bars, garden centres, health shops and large grocery outlets; and the business is in conversations with the UK’s leading supermarkets and pubs.