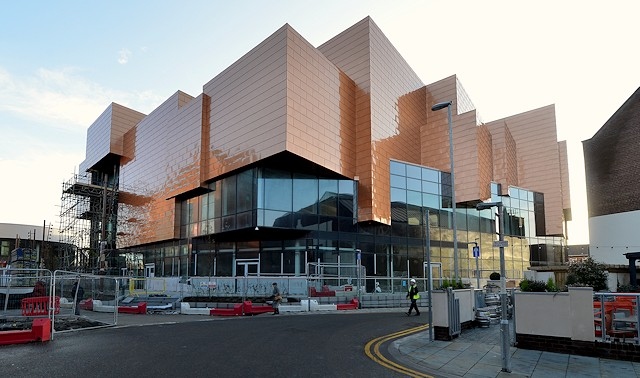 Rochdale Riverside – the town’s flagship new retail and leisure complex – will still open next month, despite growing fears over the coronavirus pandemic.

The multiplex – boasting major high street names including  M&S, Next and JD Sports, alongside a Reel Cinema, a Nando’s and Puttstars indoor-mini golf centre – is due to launch on 6 April.

But whilst the grand opening celebration has been postponed – with bosses citing the ‘paramount importance’ of public safety – the council has no powers to stop outlets opening if they wish.

The authority and its private sector partners have also signalled their ‘support’ for the retailers and ‘wider scheme’ in an official statement.

It is understood that, with staff taken on and stock ready to hit the shelves, many intend to begin trading from the town centre venue as soon as they can – provided the government does not impose more stringent measures between now and then.

The project is a huge part of plans to revive the town centre, and has been delivered by the council together with private sector partners Gener8 and Kajima.

Councillor John Blundell, the council’s regeneration chief, says that he is not unduly concerned about the impact on the Smith Street development.

“I would say it was a blow for it if this was unique to Rochdale and Greater Manchester but this is a global pandemic, nowhere else is going to benefit from it,” he said.

“It’s a fantastic scheme, we can have a relaunch when people stop self-isolating, everyone should be staying safe.”

Councillor Blundell says he understands some of the new outlets will choose to open on their contracted date of 6 April.

“We are all in the same boat, but if they want to open their doors they can – like any other shop,” he added.

Work on a second phase of the Riverside scheme, focused on delivering 228 new apartments across three buildings – is penciled in for September.

However, Councillor Blundell believes the plans – which could also include a hotel and offices further down the line – should be largely unaffected by the coronavirus situation.

He says architects involved in the scheme should be able to work from home, with the construction phase hopefully coinciding with the ‘petering out’ of the spread of the virus.

“There might be a small delay but, in the main, we’re not planning on putting the brakes on anything,” he said.

“We expect to carry on with the build out of it. The only thing that might throw a spanner in the works is if the economy goes to the wall , but we plan to continue with Phase Two – it’s a great scheme.”

Other names set for Riverside include Boots, Heavenly Desserts and Superdrug.