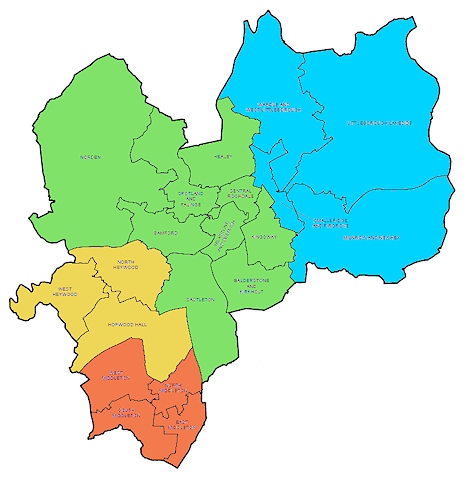 A report by the council has recommended that the council size remain at 20 wards with three councillors per ward.

The report, to be submitted to the Local Government Boundary Commission for England, has been made to help inform the decision on the council size as Rochdale Council has not had an electoral review since 2003. It will have been 19 years since the current boundaries were set by the time the review’s recommendations are in place.

The report was passed with 13 votes, of the 15 councillors present at the minimised full council meeting on Wednesday (18 March), with the two present Liberal Democrats – councillors Andy Kelly and Dave Bamford – opposing.

The council meeting went ahead with just two items from the agenda, with the minimum number of councillors needed to make a decision, 15.

The Lib Dems had recommended reducing the council by 10%, to 54 councillors and 18 wards, rather than 20, whereas both Labour and the Conservatives favoured keeping the ward boundaries and total number of councillors the same.

Seconding the movement of the recommendation made by Councillor John Blundell, Councillor Ashley Dearnley said: “We need to ensure Rochdale is not disadvantaged compared to neighbouring authorities. It is right that we continue with the same size council and number of wards.”

Boundary reviews are taking place at every council across Greater Manchester, conducted to see whether boundaries of council wards or divisions within a local authority need to be altered, to ensure areas have the recommended numbers of voters.

After the Boundary Commission responds with its initial proposal, a full consultation and engagement period with residents, businesses and other interested parties will take place, prior to a final decision by the commission in spring 2021.