You are Here: Home » News » News Headlines » Milnrow man to appear before court for role in over 50 burglaries and robberies 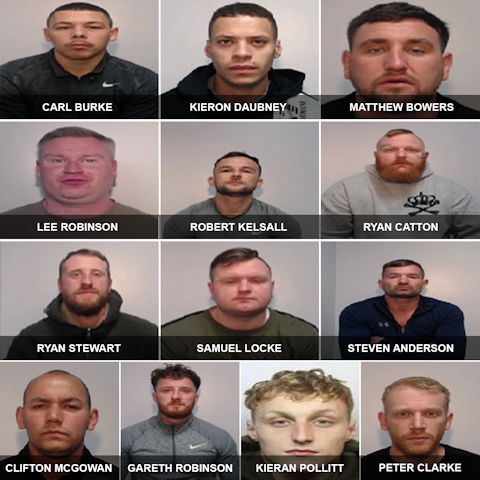 A Milnrow man is due to appear in court for his role in over 50 burglary and robbery offences across the north.

One of 13 men who committed a number of burglary and robberies across Greater Manchester, Derbyshire, West and South Yorkshire and Lancashire, Kieran Pollitt, 23, is due to appear at Minshull Street Crown Court, Manchester for sentencing on Thursday 21 May 2020.

11 of the 13 men have already been sentenced at Minshull Street Crown Court to a collective 116 years and four months in prison.

A Proceeds of Crime Hearing is also scheduled to take place at Minshull Street Crown Court on Friday 26 June 2020.

The court heard how between July 2018 and May 2019, the brazen group of criminals committed a total of 58 offences, targeting both private dwellings and commercial buildings, often committing up to four or five offences a night.

They would steal high powered vehicles, safes, cigarettes and alcohol. In total, around £1.5million worth of property was stolen and approximately £230,000 worth of damage was caused to properties in the lead up to the group’s arrests.

When committing the offences, the offenders would use machetes, sledgehammers and crow bars to force entry, and would use these weapons to threaten both members of the public and police officers when challenged.

Using stolen cars, the group would ram-raid properties in order to gain entry, showing a total disregard for the safety of others.

On one occasion, officers stopped a vehicle for displaying false number plates, unaware that the occupants had just burgled a commercial property where they forced entry by using sledgehammers to smash through a wall. The offenders stopped the car and two men emerged from the rear passenger seats – wearing Scream masks – and savagely attacked the police vehicle with sledgehammers.

Fortunately, the police officers weren’t physically injured but the car had to be recovered and sent for repair before it could return to the roads as an emergency vehicle.

On a third occasion, two victims - who were out at the time - were alerted via phone to a possible break in at their home. On returning to the address, the victims caught the offenders attempting to steal their two cars – an Audi S3 and a Kia Rio. The offenders struck the female victim with the car door before they fled with both vehicles.

Four of the offenders were arrested after a burglary at a commercial property in West Yorkshire. A further nine were arrested during police raids in Oldham, as part of Operation Hansford.

Detective Inspector Rachel Smith, of GMP’s Oldham division, said: “This dangerous group of offenders showed blatant disregard for the safety of others as they savagely attacked members of the public as well as police officers and security staff who should have been able to carry out their duties without being threatened and viciously assaulted.

“Their greed showed no limits as they committed numerous offences across the north, and the severity of this type of criminal behaviour and the impact it has on communities should not be underestimated. Their actions caused substantial damage to a number of commercial properties, causing significant inconvenience to business owners and the public, who often depend on the businesses to make an honest living and go about their daily lives.

“I would like to thank the dedicated officers both in GMP and across other forces who have been committed to bringing these offenders to justice. I can only hope that today’s result serves as an example to those tempted by crime that this type of behaviour will absolutely not be tolerated.”