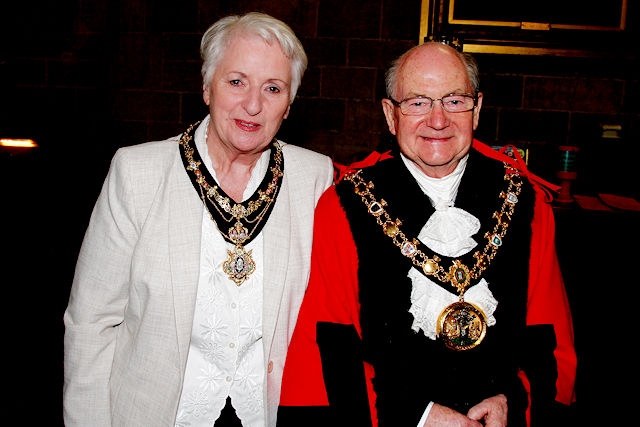 Councillor Billy Sheerin and his wife Lynn Sheerin, Mayor and Mayoress of Rochdale 2019 - 2020

This weekly column from the Mayor of Rochdale, Councillor Billy Sheerin, is about the places he has been and the people he has met during the week commencing Monday 16 March 2020.

This is the final column from Councillor Sheerin as the Mayor of Rochdale.

On Monday morning (16 March) the mayoral engagement diary had 71 events booked in prior to the end of the Mayoral year in May, with 17 scheduled for that week alone. By Monday lunch time, 15 had been cancelled and during the rest of the day the vast majority followed.

We also decided to cancel the annual Mayoress at Home event, which my wife has worked so hard on, the MP's Dinner and the traditional Mayor's Charity Ball.

These events would have raised money for the Mayor's Charity Appeal, which this year is going to not be able to be as generous as a normal year.

The coronavirus has reduced my year by just more than two months. I knew that when May 2020 came around and I would step down from being the Mayor that would be hard, but I was prepared for it. What happened last week when everything was cancelled within hours was very different and a difficult thing for me to process.

I fully understand and support the action the Government has had to make, but this does not stop the shock and sadness.

I did so much enjoy being your Mayor, not for the prestige but for the opportunity to meet so many wonderful people. I thought that when I became the Mayor that I knew Rochdale but I would soon find out how wrong I was... I had my eyes and heart opened on so many occasions. I want to thank each and every one of you for the experience.

A special thank you must go to members of the Mayor's Charity Committee for working so hard for our common aim to make people’s lives better.

God bless you all.

As the Mayor I have a responsibility to support events that focus on our health and wellbeing. I was invited to an awareness event focusing on Foetal Alcohol Spectrum Disorder (FASD) at Rochdale Connections Trust on Monday 16 March.

Beverley Place, Business Development Manager at RCT, welcomed delegates and members of the public before introducing the event programme. The first presentation was given by Amanda Fletcher, a specialist midwife on alcohol exposure in pregnancy, who asked the question ‘what amount of alcohol is permitted during pregnancy? Is it one glass of wine per day, two perhaps?'. The answer is none.

Alcohol can seriously damage the foetal development resulting in FASD. An alarming fact is that 50% of all pregnancies are unplanned and women never choose to damage their unborn baby but, not being aware they are pregnant, this is what is happening if they drink regularly. This is a frightening revelation, and a child born with FASD will possibly have facial differences and behaviour problems.

Being totally unaware of the issue of FASD I asked the question 'why was there not much more publicity and information regarding avoiding and preventing this condition?'. I was informed that Bill Esterson, MP for Sefton Central in Liverpool, introduced a Bill in Parliament in 2015 to put warning labelling on all bottles of alcohol similar to what has happened on cigarette packaging, however this doesn’t seem to have happened.

Tuesday 17 March welcomed St Patrick's Day for another year. Anyone who is Irish or of Irish decent will have known that.

At last year’s flag raising at Rochdale Town Hall, I estimated around 50 plus people attended the event and the celebration that followed. Councillor Andy Kelly provided an Irish band, Christine Mathewson gave a display of Irish dancing and Pat Shine sang Irish rebel songs and a great time was had by all. A similar gathering was planned for this year, but sadly the outbreak of Coronavirus overtook this.

I did raise the flag like I promised, but sadly with only 5 people present and that included 2 members of the Town Hall staff. With the current restrictions, this is possibly the last public event I will officiate as your Mayor of Rochdale.