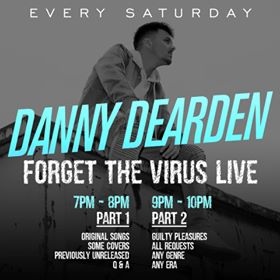 A former X Factor contestant from Littleborough will be hosting a live show this Saturday on Facebook Live.

Danny Dearden is hoping to reach out to as much of the community as he can to unite the town during the current pandemic.

“I went live last Saturday and sang some covers, also some of my own original material and played some original tracks that people haven't heard yet. The response was amazing. I have had messages from people who had linked me to their tv and were dancing around the living room as if they were at one of my shows”

“I decided to make it a weekly show where people can get dressed up, have a few drinks, and just have a good time. I love giving people a sense of normality on a Saturday night.

“Hopefully this will cheer everyone up during in these uncertain times.”

The local lad started his career by recording and uploading YouTube covers and singing at local events to gain experience and to build up his confidence, before auditioning for the X Factor in 2014. Danny has also previously hosted charity and fundraising events.

He is looking to involve as many people as possible. The shows will include requests of all genres of music and a performance of his brand-new single 'If You Love Me' which features dance music legend Dario G and is released this Friday.