You are Here: Home » News » News Headlines » M&S hands over entire food hall to Rochdale’s most vulnerable – including high-risk self-isolators 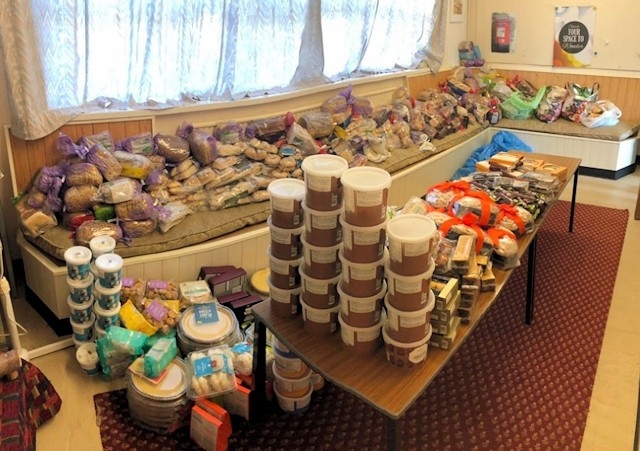 M&S has handed over an entire food hall to Rochdale’s most vulnerable people – including those enduring 12-weeks of self-isolation because of coronavirus.

Worth around £40,000 it is believed to be the biggest single food donation the retail giant has made.

The high street store opened at the new Riverside development in Rochdale town centre this week, moving from its previous home in Yorkshire Street.

Generous bosses have donated all the food from the old store to Rochdale Soup Kitchen to distribute to the most vulnerable and deprived people in the borough, as well as donating surplus pet food to the RSPCA centre on Redcross Street.

Marilyn Jones, who founded Rochdale Soup Kitchen six years ago, said she had been ‘overwhelmed’ by the generous gesture.

She said: “It’s making a massive difference already. All the fresh produce – we got lots of stuff from the refrigerators, has gone out into the community to vulnerable people who can’t get out, that was our priority.

“Now our volunteers are making up food parcels for all the hostels in Rochdale we normally deliver to. They are going to benefit from it because it’s such a massive amount, it’s going to keep us going for a long, long time – for months.”

Marilyn set up the soup kitchen in 2016, initially operating from the back of a car behind Rochdale Town Hall one night a week.

It now has a permanent base at Champness Hall, in Drake Street, serving food four evenings a week and a home cooked meal on a Saturday.

Unfortunately, it was forced to close its doors when the government introduced lockdown measures nearly three weeks ago, depriving many of a vital lifeline.

But now Marilyn and her team of volunteers are back in action to ensure the food reaches those most in need over the coming weeks and months.

After getting the nod from M&S, three volunteers were dispatched to the old Yorkshire Street store, to bring food back to a central hub set up at Thrum Hall Methodist Church, in Healey.

However, they soon found they had a bigger job on their hands than they had anticipated.

“There’s enough to keep people going for months there is so much,” said Marilyn – 2018’s Rochdale Woman of the Year.

“There were three volunteers from the soup kitchen that went to pick it up, we told to take a couple of vans.

“One said they made about 14 journeys – that’s only one volunteer in a  big estate car – it took two days to get all the food from M&S up to the church and now we’ve sorted through it all.”

Distributing the fresh food – including chicken, salmon, hams and even some caviar – was the team’s first priority, with much of it going to those in 12-week isolation.

Then work began on making up hampers of shelf-stable – or ‘ambient’ – food, to send out to the soup kitchen’s regular service users – as well as numerous hostels including Leopold Court, The Limes, and Statham House.

The hampers include – bread, biscuits, crisps, Easter eggs, chocolate, nuts and dried fruit – as well as ready meals from M&S’ Dine In range.

Marilyn added: “We are taking out and  delivering the food parcels to our soup kitchen service users three times a week – Monday, Wednesday and Friday we are sending parcels out with drivers and every time their list (of recipients) is getting bigger. Yesterday we sent out 100 food parcels.

“The food is being shared between the hostels and 100 food parcels are going out every two days to our service users who use the soup kitchen normally.”

To ensure social distancing, delivery drivers leave parcels outside recipients’ homes, ring the doorbell and wait for the person to collect it before driving away.

Despite the necessary lack of interaction, people have already been in touch with the soup kitchen to express their appreciation.

“People have said how grateful they were, and couldn’t believe what they had in their hamper,” said Marilyn.

“One service-user from the soup kitchen said he would not have been able to manage if not for what he had got.”

Natalie Dugdale, store manager at M&S Rochdale Riverside said the relocation of the Yorkshire Street outlet had provided a ‘key opportunity’ to make a ‘significant food donation to the community.

She added: “We provided a range of short-life products which will support the soup kitchen in providing meals for vulnerable people.

“We’ll continue to donate to the soup kitchen via our food redistribution scheme and are pleased we have been able to provide vital support within our local community.”

M&S also works with its partner organisation Neighbourly to identify ways it can support local charities.