You are Here: Home » News » News Headlines » Council announces plans for thousands of new homes as part of rail regeneration 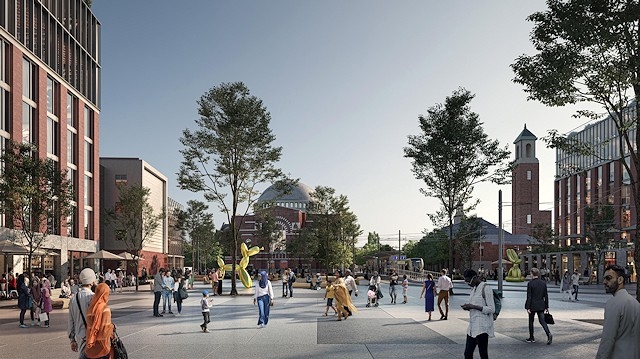 The proposals include a new public square at Rochdale railway station

An ambitious plan to create over 7,000 new homes and 250,000 square metres of employment space along the Calder Valley rail corridor has been unveiled by Rochdale Borough Council.

The masterplan proposes major redevelopment around the borough’s five railway stations; Rochdale, Castleton, Smithy Bridge, Littleborough and Mills Hill, as the council gets the borough ready for its next phase of regeneration.

The plans, which were drawn up with urban planners Broadway Malyan and WSP, will prioritise the creation of new neighbourhoods on underused brownfield sites, which are close to local amenities and transport links.

The Alliance is working in partnership with local councils to spearhead regeneration opportunities around rail stations, investing in key facilities and boosting economic growth. Rochdale will be the first borough in Greater Manchester to benefit from the new partnership.

With 2.7m journeys made from Rochdale’s railway stations last year, the council considers them prime sites for economic development.

Councillor John Blundell, cabinet member for economy, business and skills at Rochdale Borough Council, said: “The land around our railway stations has huge potential for regeneration because you’re putting people close to the transport connections and local facilities that you need to create sustainable neighbourhoods.

“Rochdale’s incredible connectivity, with five railway stations, and a sixth on the cards, puts us in unrivalled position to repurpose brownfield sites along the Calder Valley corridor to unlock thousands of new homes which are a stone’s throw from Manchester city centre, for a fraction of the price.”

Major proposals being worked up include:

The plans will also include development around a potential sixth railway station in the borough, which is proposed for Slattocks in Middleton as part of TfGM’s 2040 transport strategy.

More detailed masterplanning work and feasibility studies will be taking place in the coming months, with construction of the first new homes identified in the strategy set to begin as early as next year.