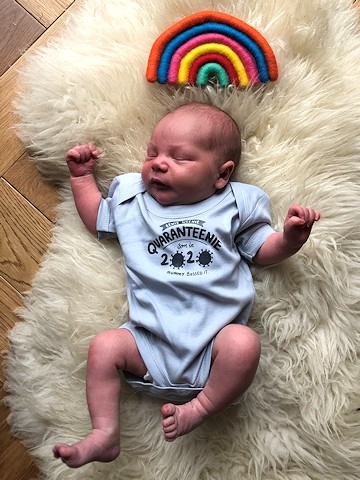 Baby Dawson in one of the Eenie Weenie Quaranteenie baby vests

A Littleborough couple have created a special charity baby vest for babies born during the pandemic, raising over £3,000 in the process.

Jenny Piggott, who runs a small business called Boss Babs which makes empowering children’s products, and her fiancé Martin Tighe came up with the idea to create the vests for charity after a good friend sent them a baby-grow for their then-unborn baby boy, reading “born in 2020.”

After Jenny made a sarcastic remark to Martin about giving birth during a global pandemic, Martin, who works in advertising, replied that she should make them for other babies born during the pandemic.

They then decided to donate 100% of the profits to the PANDAS Foundation UK (Pre and Postnatal Depression Advice and Support), the UK’s leading charity which supports families suffering from pre- and post-natal depression.

Mother-of-two Jenny said: “Originally it was going to be ‘The Covid Kid’ but we thought that wasn’t quite as cute we wanted to keep it positive. So we settled on ‘eenie weenie quaranteenie, born 2020’.

“We wanted to add the words ‘mummy bossed it’ as we figured many would be gifts and we really wanted something morale-boosting for all the amazing pregnant mamas out there.”

Initially the couple spend days trying to source vests, before finding a baby clothes wholesaler in Leeds. Acquiring 571 vests, Jenny and Martin launched 100 vests via the Boss Babs online shop and Instagram pages on 13 April, before they sold out in two hours.

After ordering a second batch of vests, the duo had the vests printed by Andizyne Embroidery, Garment and Gift Printers in Wardle.

The day after launching the second batch, Jenny gave birth to a healthy baby boy – the inspiration behind their vests – weighing 8lb 5oz, Dawson Stephen Tighe in Oldham on 23 April.

She said: “As soon as my fiancé got home from hospital, he started packing all of the orders which is crazy. I had told him to go to bed, but he wanted it done so we could concentrate on our new arrival when we got home.

“My birth experience was absolutely incredible. The care I received was amazing and I cannot thank them enough. I felt safe and we were in our own little bubble. We totally forgot about everything going on the outside world and Martin was with me throughout. “Carol, my midwife and absolute hero, was incredible.”

Talking about their decision to support PANDAS, Jenny explained: “There has been lots of anxiety and fears about attending midwife appointments, scans and even having to birth alone.

“We felt that going down the route of a parents’ pre- and post-natal mental health and support charity would be well-suited.

“These new parents and us woman need support more than ever after you’ve brought a new baby into this world. The days are hard, the nights are long, and emotions are high.

“And we found last time that no-one can actually prepare you for what’s about to happen. I really felt for the first-time mums out there remembering how much I struggled after the birth of my daughter in London with no family or support around.

“I wish I’d have reached out for some help/advice looking back, there really is no shame in it.

“We were going to try and do more [vests], but it really is too much for us to take on again right now.”

However, printer Dawn has fully taken over and the vests are now available through her site at:

Jenny said: “There will be lots of new families feeling very alone out there and this project really helped me realise that there’s so many people out there going through the same thing. Hopefully, our vests have not only raised money for charity, but given lots of mums a boost to receive them.

“We have received some absolutely lovely messages from mums and mums-to-be.”

“Thanks to everyone who bought one!”

Annie Belasco, head of PANDAS, said: "PANDAS is delighted to have collaborated with Boss Babs on their fabulous baby wear vests. At a time of such uncertainty and anxiety for all new and expectant parents this is such a delightful and uplifting concept to lift the spirits of parents.

"PANDAS would like to remind all parents that we operate a free helpline available to all on UK landlines and mobile phones. If you know anyone who may be struggling with their perinatal mental health please do call us Monday - Sunday 11am-10pm. 0808 1961 776.

"We would like to send a huge thank you to the team for donating the sales of the vests to us at PANDAS. So many parents will continue to benefit from our emotional support."