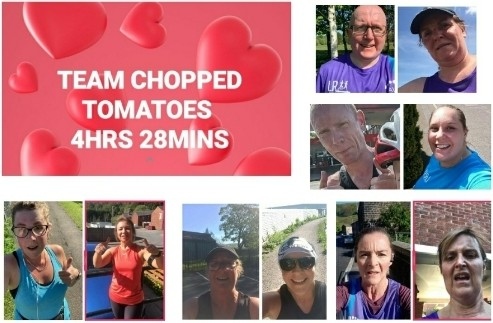 LABC Runners and Littleborough Runners joined forces after the Covid-19 pandemic halted the planned spring marathons that several members from both the England Athletics-affiliated clubs had been training for.

Split into six teams of 10 – all named after lockdown kitchen staples – the runners went out on Saturday (9 May) to complete 2.62 miles each.

Aggy York, of LABC Runners, came up with the idea with Julia Moore, of Littleborough Runners, deciding to bring the clubs together under the following teams: Flour, Loo Roll, Yeast, Pasta, UHT Milk, and Chopped Tomatoes.

Aggy, who was going to take part in this year’s now postponed London Marathon, said: “I was fortunate enough to win our club place for the marathon, so I was gutted it had been postponed after all the training. As several other members from each club were in the same position, Julia and I decided we should join up for a virtual relay marathon and mix as teammates.”

The race started at 8am on Saturday via Facebook Live. After setting off and running their 2.62 miles, the runners had to take a photo of their run watch, confirming the correct distance, take a sweaty selfie and tag the next runner. 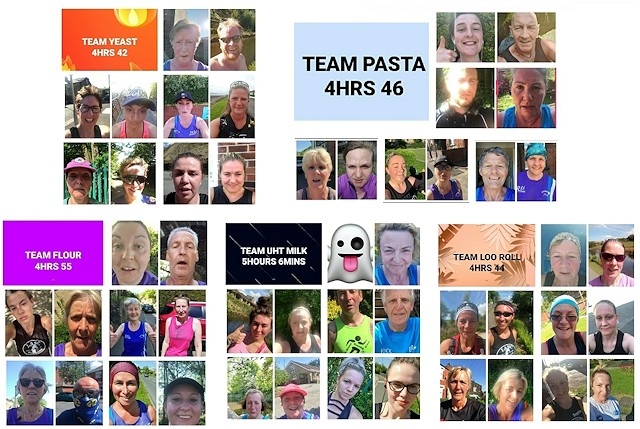 The virtual baton was accepted by ‘liking’ the post on Facebook, and continued in this manner until all runners had completed the virtual race, which was won by Team Chopped Tomatoes.

After a last-minute drop-out, the clubs even had a stand-in from Scotland, a previous LABC Runner who recently moved to Inverness and completed her 2.62 miles there.

Aggy continued: “Many of the runners have befriended each other between the two clubs on Facebook and Strava [a fitness social network app] and we can now put names to faces and wave a cheery hello if we meet after lockdown.

“We have had so many people ask for another inter-club event again before the end of lockdown as it got the pre-race nerves jittering and the post-race euphoria too. And it was so lovely to see us all running as one big team rather than rival clubs.”