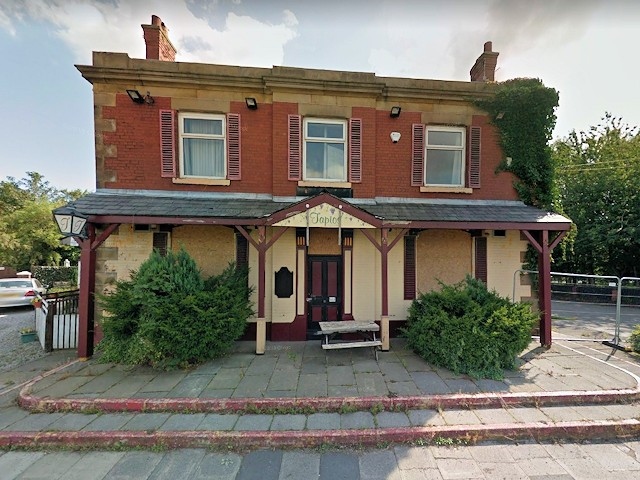 Proposals to bulldoze a former tapas restaurant and replace it with a three-storey apartment block have been rejected for a second time.

The scheme would have seen Middleton’s once-popular Tapios eatery – which was gutted by fire four years ago – flattened to make way for 14 two-bed flats.

But despite applicant Gary Hyde Associates tweaking the plans in a bid to create a ‘sensitive development’ that would blend in with the area, planning bosses have again refused to grant permission.

A decision notice issued by Rochdale Council says plans for the Heywood Old Road site, in Bowlee, would result in a ‘discordant form of development at odds’ with the low-rise character of the area.

The officer’s report adds: “The amalgamation of differing building styles would result in a clumsy arrangement of adjoined building sections.

“The rear section would dominate in height and appear particularly incongruous given the utilisation of a mansard roof which is not a common feature of the local area.”

It also says there is ‘inadequate parking’ and the development would result in an ‘unacceptable loss of privacy’ for residents of a neighbouring property.

Although not listed – and badly fire damaged in September 2016 – the former restaurant is considered a ‘heritage asset’ by the council.

Dating to the mid-19th century the restaurant was formerly The Jolly Butcher Inn – and while much has changed over the years, planners said its demolition and resultant total loss’ of historic ‘significance’ had not been justified.

The decision notice adds: “Whilst it is recognised that the building has suffered fire damage, and the submitted Heritage Statement states that ‘the reuse, incorporation or restoration of the existing building is not a viable alternative’, it remains that no supporting evidence has been provided to confirm this.”

It also queries a claim that the heritage value of the building is ‘low’ made in an assessment with the application, given it ‘has been a focal point of the area for over a century’.

As the council’s planning committee of elected members is not currently meeting, due to coronavirus, the decision was made by officers under delegated powers.

Summarising the reasons for refusal, the decision notice adds: “Taken as a whole, the development is considered to represent poor design that fails to take account of local context.”

It is understood that Tapios had closed down shortly before the devastating fire in 2016.

A similar proposal for the site was rejected by last year on similar grounds, with planners finding ‘significant’ height and size to be out-of-keeping with the character of the area.