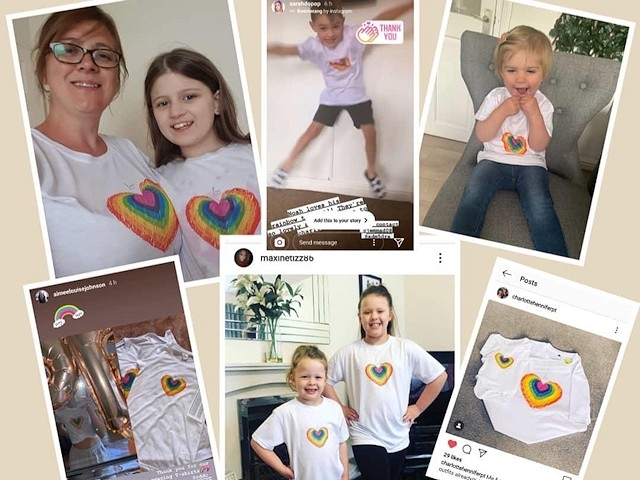 A couple from Norden have launched their own charity t-shirt depicting a heart-shaped rainbow, with all profits going to North West Sew for the NHS.

Jemma and Adam Dransfield designed and printed the t-shirts after seeing similar ideas being sold by larger retailers.

Jemma said: “I kept seeing them, and I really wanted one. We heard through my friend and colleague, Becki, that North West Sew had been asked for a large amount of scrubs, and the same day, a friend asked us for an NHS slogan t-shirt.”

The couple, who print their own merchandise for their dance school, Rossendale Dance and Drama Centre, sat down the same afternoon to design a t-shirt.

Jemma said: “Luckily we don't have a specific reason for doing them. We have friends and family who have lost loved ones and who are keyworkers, paramedics, GPs and neonatal nurses who are doing more than their bit and we just want to do ours.”

After sending the final design to friends and family – who wanted to order – the initiative grew, with Jemma and Adam deciding to donate profits directly to the sewing cause, which is creating scrubs for frontline staff.

“The North West Sew was the perfect place for the money to go, as we had started to become concerned about where our money was going when donating to different causes, and, most importantly, how much of it,” Jemma explained. “This way, we can guarantee every penny made will do towards the local manufacture of PPE for local NHS staff.”

When Rochdale Online spoke to Jemma, the duo had sold 165 t-shirts and just finished a second round of deliveries – resulting in £805 for the North West Sew.

Jemma added: “Support from friends and family, strangers and our dance family has been amazing.

“With their kindness and help, we have sold 165 t-shirts, which have been posted throughout Greater Manchester and even to Hamilton and Doncaster. We will keep doing them as long as people want them.”

You can order one of Jemma and Adam’s t-shirts by emailing info@rddc.co.uk

All sizes are £10 with all profits being donated to the North West Sew.

There is currently a waiting period of approximately seven days from order date.