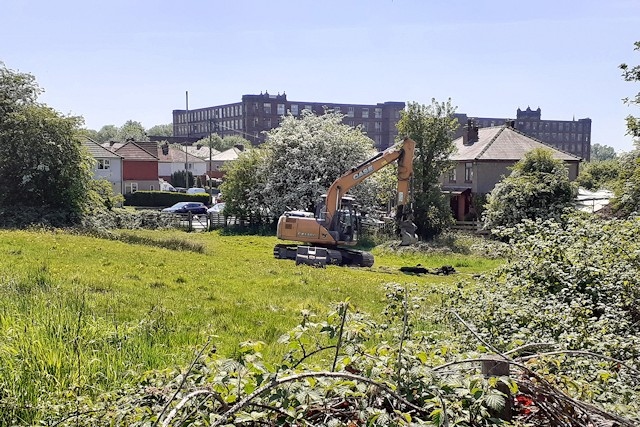 Heywood residents are concerned that development is taking place on green belt land near Crimble Mill - without a planning application - after an excavator and people in hi-vis vests were spotted on site on Wednesday (20 May).

The excavator appeared to be digging holes and trenches on land off Woodland Road and Rye Street in Heywood, despite no planning application having been submitted for the site.

A former cotton mill, Crimble Mill has been listed on the national Heritage at Risk Register since 2005 and is defined as a building at immediate risk of further rapid deterioration.

The Grade II* listed mill and the surrounding fields have been identified for change of use to develop around 250 houses, prompting concerns about flood zones, impact on the schools, wildlife and unregistered coal mines.

In response to the area being included in the latest draft of the Greater Manchester Spatial Framework, a group called Save Crimble Mill Green Belt was formed in January 2019 by Iain Brown and other Heywood residents

Around 70 residents and members of Save Crimble Mill Green Belt marched around Heywood’s Crimble area in sleet, snow, hail and rain, in March 2019 to protest against plans to build on the land.

After concerned residents contacted local MP Chris Clarkson, staff from his office attended the site to speak to contractors who stated that they were carrying out an 'environmental study on behalf of Countryside Properties' which would involve some 'minor disruption', but that 'all land movement would be put back following their survey'.

Mr Clarkson said: “Local people are aware that this is one of the greenbelt sites which is under threat of development in the Greater Manchester Spatial Framework (GMSF), so it is completely understandable that residents raised the alarm when it seemed that contractors had moved in.”

“I am glad that we were able to act quickly to support residents and alleviate those fears and I have given them my reassurance that they have my total support in making sure that this green space remains somewhere that can be enjoyed by local families, and wildlife.”

There is also a public facebook group called ‘Save Crimble Mill Green Belt’ where one member commented yesterday: “A new planning application is likely to be submitted following this so we must be vigilant and gather as much support to save our green belt as we possibly can.”