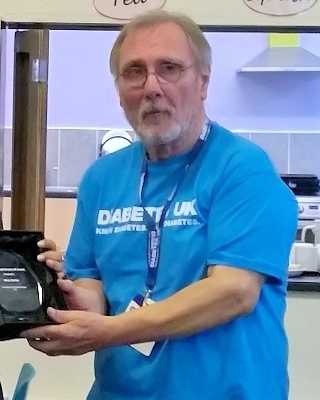 Henry Gerber with his Inspire Award from Diabetes UK

A Rochdale man who campaigns and volunteers tirelessly for Diabetes UK has received a special award from the charity.

Henry Gerber, 70, of Smithy Bridge, won the David Mottershead Award and Campaigning and Influencing at the 2020 Inspire Awards, which are held each year to recognise the invaluable contribution of volunteers who go above and beyond for people living with diabetes.

Dad-of-two Henry, who was diagnosed with type 2 diabetes in his early 50s, has been a volunteer for Diabetes UK for more than eight years. During that time, he has attended numerous events, helping members of the public understand if they are at risk of developing diabetes. He also supported Diabetes UK’s ‘It’s Missing’ mental health awareness campaign by attending the launch event at the Houses of Parliament last year.

Clare Howarth, Head of the North of England at Diabetes UK, said: “Henry is a keen supporter of our work, always one of the first volunteers to respond to our calls. He is a much-valued volunteer and this award shows just how grateful we are for his dedication and willingness.

“Diabetes UK’s work wouldn’t be possible without the incredible support of people like Henry. I would like to extend my sincere thanks to all of our volunteers and supporters who make an enormous difference.”

Henry added: “I was so happy to get the award – it was a real honour. I just really like helping people. I like getting out and about and talking to people, and when I see people who are in the same boat as I was – I am able to help them. That gives me a lot of satisfaction.”

Henry received his Inspire Award from Diabetes UK through the post and attended an online awards ceremony earlier this month, with fellow winners from the North West region. His award is named after David Mottershead, a valued supporter and campaigner for Diabetes UK in the Cheshire area.

Diabetes is a condition where there is too much glucose in the blood because the body cannot use it properly. If not managed well, both type 1 and type 2 diabetes can lead to devastating complications. With the right treatment, knowledge and support people living with diabetes can lead a long, full and healthy life.

To find out more about becoming a volunteer for Diabetes UK, or to join a local support group, please email n.west@diabetes.org.uk or call 01925 653281.