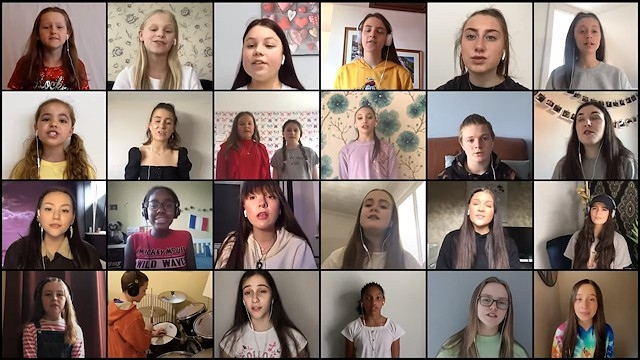 Screenshot from the Manchester Virtual Youth Choir recording of These Days

The Manchester Virtual Youth Choir made its online debut on Sunday (21 June) with a powerful rendition of These Days by Rudimental and Jess Glynne, which also features an original rap thanking the NHS and keyworkers.

Led by choir leader Phil Reynolds from Rochdale, 28 students aged between seven and 23 recorded their parts on phones and tablets whilst in isolation between April and June 2020 during the Covid-19 lockdown, coming together virtually to create the cover of the track.

The video features students from Rochdale. Middleton, Heywood, Littleborough and Stockport (including several who have appeared in professional shows, such as Sofia Wilkinson-Hill who played bass-player Katie in School Of Rock in the West End last year), plus a special introduction by Rochdale soap star Sue Devaney.

Phil, who runs Sing! Littleborough, the Rochdale Carers Choir, Tameside Voices and Sapphire Blue, says the virtual youth choir began as a free way to keep his vocal students busy, as not all could continue with online lessons during lockdown for various reasons.

He said: “I decided to try find a way to bring as many of my vocal students together as possible to help give them a focus at a difficult and stressful time. Many young people have really struggled with mental health and anxiety in isolation.

“I’ve often wondered just how it would sound if I put all my students together in a room and gave them harmonies to sing. The following is an attempt to make a negative into a positive by seizing the opportunity to do exactly that – but obviously in a virtual setting.”

He added: “I knew it would sound good, but in my opinion the results are extraordinary.

“Well done and thank you all so much for letting me be a part of something special.”

The three-part harmony vocal arrangements were created by The Voice vocal coach Mark De-Lisser, whilst the video was created by piano student Sam Townsend, a former pupil at Wardle Academy who is now studying music at Rochdale Sixth Form College.

Live drums were recorded by 13-year-old Scott Heap, whilst the NHS rap was created by Emily Moran and Lily Kenny, who was a Teenstar grand finalist in 2018.

The video is dedicated to those struggling with mental health issues, such as anxiety or depression.

Avoid queues at the checkouts, visit the Drinks Aisle!