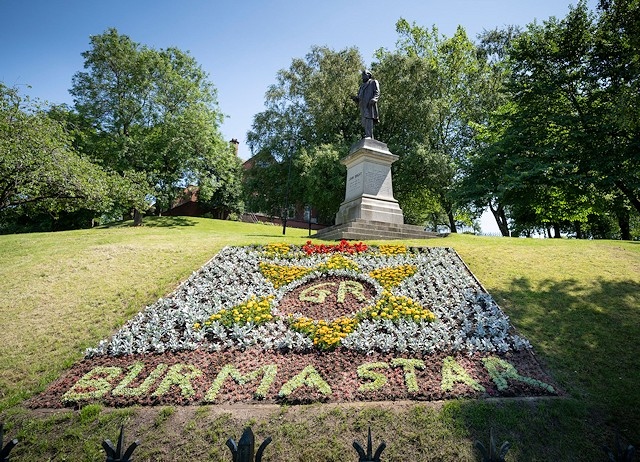 A special tribute to commemorate 75 years since the end of the campaign in Burma during World War Two has been installed in Rochdale ahead of Armed Forces Day on Saturday 27 June.

The display, designed and installed by the council’s environmental management team, took more than 1,400 plants to create and replicates the medal awarded to British and Commonwealth forces who served in the Burma Campaign from 1941 to 1945.

The Burma Star floral display is on Broadfield slopes in Rochdale beneath the John Bright statue and can be seen from the Manchester Road/The Esplanade/Dane Street junction.

Councillor Neil Emmott, cabinet member for environment at Rochdale Borough Council, said: “We were delighted to have been able to fulfil this vision acknowledging the brave contribution and the many sacrifices that soldiers made throughout World War Two. We honour those with this mark of respect - remembering those fallen and celebrate those still with us today.

“It is symbol of remembrance, but also brings colour and signs of new growth within our borough, through which has been a difficult time. I hope that it will be enjoyed by residents and visitors alike throughout the coming weeks.”

The initial idea was pitched at Rochdale in Bloom by the Rochdale and District Fusiliers’ Association, which resulted in the collaboration.

Roy Down, chairman of Rochdale in Bloom, said: "The chance to help commemorate 75 years of the Burma Star was something that we did not hesitate to say 'yes' to. Rochdale in Bloom has a history of helping to create features that commemorate people who have served their country, especially those who have paid the ultimate sacrifice. This project is once again a great example of different groups working together in co-operation to create something meaningful in our town."

“This medal was awarded to British and Commonwealth forces who served in the Burma Campaign from 1941 to 1945, during the Second World War. As well as British Army units, many of its units were from the Indian Army and there were also significant contributions from West and East African divisions. They called themselves the forgotten army - they will never be forgotten here. We will be marking the event over the weekend of the 15 and 16 August, details to be confirmed.”

Usually, a display would have been created for the Royal Horticultural Society’s flower show in Cheshire’s Tatton Park this July, but as this is not going ahead, this display, here in our borough can be appreciated by many.

A flag will be raised outside of Rochdale Town Hall on Friday 26 June as a mark of respect.