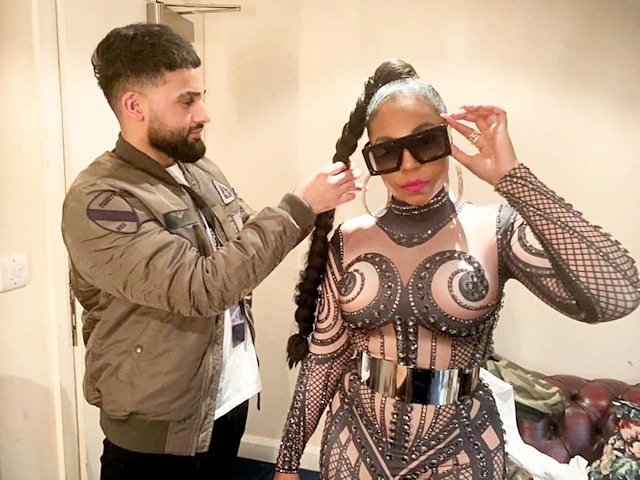 Mohammed Ilmaas styling singer Ashanti before one of her UK concerts

A multi-award-winning hair stylist from Rochdale has revealed how he came to style the hair of one of his celebrity idols, the award-winning singer Ashanti.

Mohammed Ilmaas, who runs Hair by Ilmaas, says he used to dream about working with Ashanti, one of his favourite artists, famous for singles such as ‘Foolish’, ‘Rock wit U (Awww Baby)’ and ‘Only U’, which all broke the top 10 upon their release.

Ilmaas said: “Growing up as a 90s child and listening to 90s music throughout my teenage years, Ashanti was one of the artists who I felt I could connect to the most, not only for her music but also her character.

“I have always respected and loved Ashanti, not only for her talent as a singer, but also for her achievements.”

Ashanti became the first female artist to occupy the top two positions on the U.S. Billboard Hot 100 chart at the same time. With ‘Foolish’, which spent 32 weeks in the charts, she became the second artist after The Beatles to have their first three chart entries simultaneously in the top ten of the Billboard Hot 100.

Her eponymous debut album, released in 2002, has been certified triple platinum in the United States, and has sold over 15 million records worldwide. The album earned her a Grammy in 2003 for Best Contemporary R&B Album, the first artist to win this award.

Ilmaas grew up styling his sisters’ hair from the age of 15, before becoming a mobile hairstylist. He opened his unisex hair salon, Hair by Ilmaas, on Whitworth Road just over three years ago.

With over 12 years of experience in the industry, Ilmaas’ passion has led him to be an award-winning and published hairstylist, winning an Oracle Award three years running, as well as best hairstylist at the Fashion and Beauty Awards in 2018.

After contacting independent concert promotions company Geestar Empire, the connection was made. Ilmaas’ portfolio was shown to Ashanti – and she agreed for him to style her hair for one of her Manchester concerts earlier this year.

After arriving fully equipped, Ashanti and Ilmaas decided to create a half-up, half down look.

Ilmaas added: “This included a sleek ponytail with the rest of the hair volumised with bouncy, uplifting curls. Ashanti was very happy with the decision as it complimented the look she had already gone for with.

Ilmaas says that Ashanti was so impressed, she then asked him to style her hair again for a second concert in Leeds – giving him full control over the style.

He said: “I was thrilled as this represented that Ashanti was very pleased with the look I created for her. Asking me to do her hair was considered as an achievement within itself, but she then gave me the honour of creating any hairstyle which I wanted, and left the decision in my hands.

“I was very grateful for this. I know as a hairstylist how difficult it is for anyone to trust you with something so delicate like their hair and especially for such a huge event. I again opted for a slicked-back ponytail, but this time swapped the curls for a thick, tight braid. I felt like this hairstyle held a statement and really stood out once she was on stage.”

Ilmaas added: “It was a pleasure to meet Ashanti herself, but it was also a pleasure working with such a warm-hearted and bubbly individual. A huge thank you to Geestar who presented this amazing opportunity to myself and who gave me the chance to really show my talent and passion working as a hairstylist.

“My thanks also go to Godfrey, who supported me throughout this adventure working with Ashanti and the rest of the team, as he really helped my dreams come true.”