You are Here: Home » News » News Headlines » Alternative plans for HS2 and Northern Powerhouse Rail ‘could save billions’ with new underground station at Manchester Piccadilly 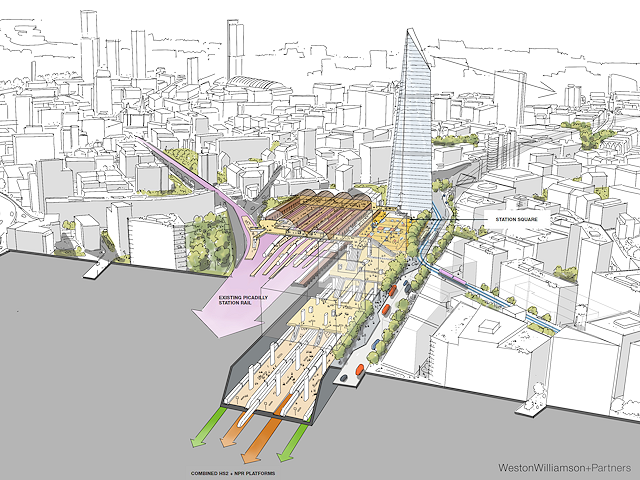 New proposals ‘which could save billions’ have been drawn up for a new and fully integrated high-speed station development at Manchester Piccadilly Station.

Drawn up by architects Weston Williamson + Partners and engineering consultants Expedition, the design has been created as an alternative for existing plans for HS2, and Northern Powerhouse Rail (also known as ‘HS3’).

As part of the combined plans, a new high-speed parkway station could be built close to Junction 20 of the M62 to serve Rochdale and Oldham.

High Speed 2 (HS2) is the controversial proposed new high-speed railway directly connecting Leeds, Manchester, Birmingham and London, funded by UK taxpayers. HS2 is being designed to operate initially at 360 kilometres per hour, faster than any other train in the world.

Northern Powerhouse Rail is a proposed rail network which would link in with the West and East Coast main lines and HS2, providing wider connectivity to Scotland, Wales and the rest of England.

The new proposal by Weston Williamson + Partners and Expedition would allow direct high speed train services from Birmingham, Liverpool and Glasgow to Leeds via Manchester Piccadilly greatly improving connection across the north.

Direct HS2 services between London and Leeds would also become possible via Manchester, giving the option of deferring the Phase 2b branch between Birmingham and Leeds, which could save billions of pounds, according to the designers.

HS2 and Northern Powerhouse Rail’s existing stations would be combined into a single integrated through station located below ground, rather than a terminus station above ground - High Speed Station Square.

The designers say that if the HS2 and Northern Powerhouse Rail platforms are built as terminus platforms as planned, Mancunians will continue to experience cross-city rail connectivity problems, as well as experiencing slower journeys across the city and reducing capacity on new platforms.

The proposal, which has been submitted to a government-backed review, continues the currently proposed HS2 tunnels approaching from the south as a high-speed rail tunnel beneath central Manchester that curves to the north-east to follow the M62 corridor towards a new trans-Pennine tunnel and Leeds.

Creating an “S-shaped” high-speed rail tunnel below central Manchester, the through station design does not require trains to reverse at Manchester Piccadilly as part of a journey between Leeds and Liverpool.

It would allow for the through-running of a high speed train service between Liverpool and West Yorkshire via both Manchester Airport and Manchester Piccadilly. 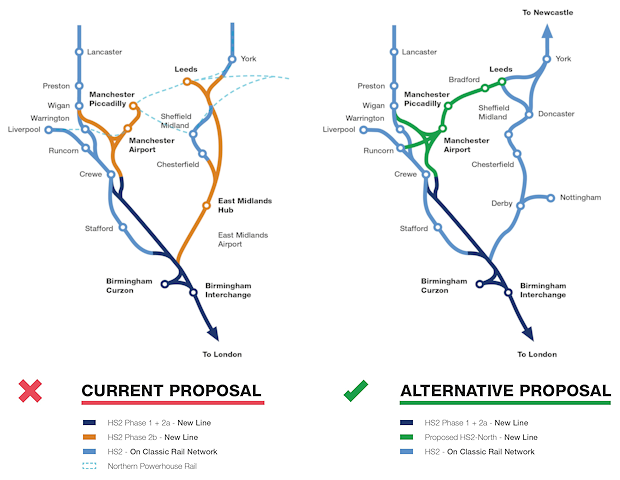 Alistair Lenczner, Director at Expedition Engineering, said: “The High-Speed Station Square proposal at Manchester Piccadilly fully responds to the questions raised in the Oakervee Report as well as showing a clear design solution in line with its recommendations.

“At a time when plans for both HS2 and NPR are being reconsidered in the north of England, the HS Station Square proposal should be seriously considered as an alternative to existing plans.”

Rob Naybour, Founding Partner at Weston Williamson + Partners, added: “Our experience of similar projects around the world is testament to the regenerative potential of infrastructure projects of the scale of that proposed in Manchester.

“Getting this right and creating an attractive destination and a beacon for jobs will attract investment from a wide-range of sources.”

He said: “It follows broadly a route which has been mentioned as a possibility in the past including a line built almost the whole way on a viaduct.

“Although criticised by some as an unjustified alteration to the original HS3 route, this proposal would give Oldham and Rochdale a joint HS3 station near junction 20 of the M62. This has been the subject of discussions with local authorities for a long time.

“It has been suggested as a need to keep costs down, but inevitably, there will be winners and losers.”