You are Here: Home » News » News Headlines » Castleton Health and Leisure Centre undergoes refurbishment as it prepares to reopen after lockdown 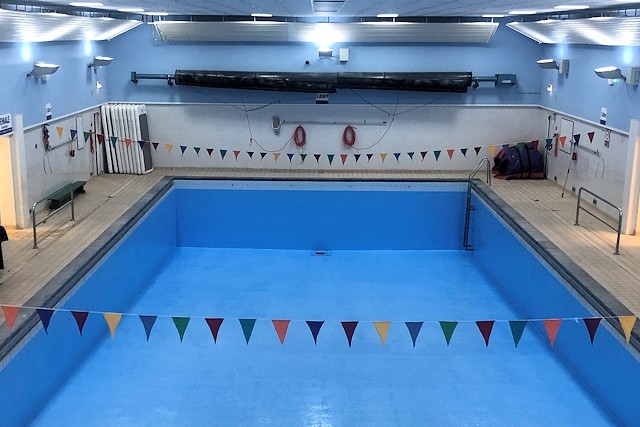 The swimming pool at Castleton Health & Leisure Centre, pictured during the 2020 refurbishment

As it prepares to re-open its doors to the public for the first time since March, Castleton Health and Leisure Centre has spent the Covid-19 lockdown period being refurbished with a brand-new look.

The former Castleton Baths re-opened its doors to the public under its new name - Castleton Health and Leisure Centre - on Monday 16 October 2017, after the pool’s long-term future was secured following a community asset transfer to local businessman Nick Crewe, who restored the baths to their former glory.

Since then, it has become one of Castleton’s most used facilities, with many local residents sharing fond memories of the venue.

Following government guidelines, the well-used Edwardian baths closed its doors on Thursday 19 March: then with no indicator of when it could reopen.

Whilst the country awaited the reopening of gyms and swimming pools, work went on behind the scenes at the 110-year-old baths, ensuring it will be in great condition when given the green light to reopen.

After several days of not being in use, it was discovered that there was a leak in the pool, when water levels dropped to half its usual capacity. As soon as rules were relaxed, Nick’s team quickly began work on the centre.

Facility manager Jo Potts told Rochdale Online: “Once we discovered the leak was quite drastic, we took the decision to empty the pool and carry out essential maintenance.”

Taking two weeks to drain the pool dry, sand it and repaint it, the lockdown period proved to be the perfect time to carry out a facelift of the leisure centre, which could not afford to close under normal circumstances for such a length of time.

The pool sees hundreds of visitors each week, from schools and swimming clubs to classes and public swimming sessions. The week before it closed, close to 1,000 people had visited the centre.

Jo added: “We decided to turn the situation into a positive one and carry out the work to further enhance the previous refurb.”

She added: “It’s quite poignant really, reopening in July, as this time three years ago, we were preparing to re-open after taking the centre on as a CIC. It’s quite exciting and is bringing back a lot of those memories and feelings.”

With no holds barred, the work entailed a full repaint of the pool, converting all lights to eco-friendly LED bulbs, revamping the first-floor gallery to increase the viewing area for the public, renovating the ceilings in both changing rooms, refurbishing the pool steps, and bringing back five swimming lanes.

Both Rochdale Online and the Mayor of Rochdale, Billy Sheerin, were treated to separate sneak preview visits of the works during the lockdown period, with the Mayor quite moved at the sight. Like so many local residents, Mayor Sheerin learned to swim at the Castleton Baths, as did many members of his family.

Exclusive photos of the finished look will be published on Rochdale Online soon.