You are Here: Home » News » News Headlines » “I’d lost my boy and there was nothing I could do about it” – Paul Lawson’s mum speaks of her loss for new water safety campaign 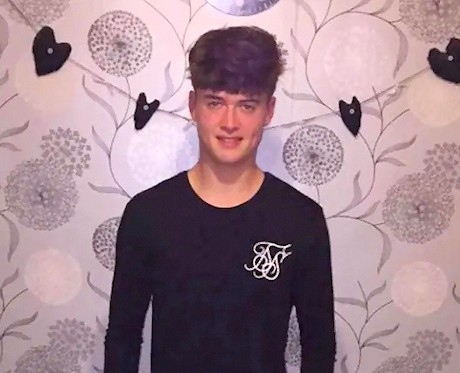 Paul Lawson’s mum and friends have shared their heart-breaking stories as part of a new campaign to prevent accidental drownings in open water.

Alongside three other families, they have taken part in a short film with Greater Manchester Fire and Rescue Service (GMFRS), which is leading the prevention campaign, to help keep people safe around open water, reaching out to others in an attempt to stop them ever experiencing the same heartache as them.

16-year-old Paul sadly drowned in June 2017 after he went swimming with his friends in Greenbooth Reservoir. It was a hot day and the teenagers thought it would be a good idea to go into the water to cool off.

Paul was a first-year BTEC Sport student at Hopwood Hall college and keen footballer. Having previously played for Wardle FC, Paul was a member of the Hopwood Hall Football Academy team at Middleton Campus when he died.

Natalie Lawson has bravely shared her story with GMFRS to help raise awareness of just how dangerous open water, such as reservoirs, can be.

Paul’s friends – Ben Hough and Jordan Yates – have also shared their stories of losing a close friend. The pair are urging people not to go into open water and talk about how their lives have changed forever.

Ben said: “Losing Paul has changed me so much as a person. It’s one of them feelings, and I don’t want anyone to experience what we have.

“You always think it’s never going to happen to you but it does, and it mentally damages you.”

Jordan added: “Adults speak sense when they’re telling about staying safe around water, but when you’re with your friends you don’t even think about it – it’s the last thing on your mind.”

Since June 2016, GMFRS firefighters have been called to 31 fatal water incidents. Sadly, many of those who drowned were young men who got into difficulty after jumping into open water on a hot day to cool off over the summer months, however, these incidents can happen at any time.

As part of the campaign there will be a Water Safety Day of Action on Friday (31 July) – which will see firefighters from across GMFRS join together with Greater Manchester Police, United Utilities and other local partners to help raise awareness of the dangers of open water.

Some family members who have lost loved ones to drowning will also be involved in the day.

GMFRS Assistant Chief Fire Officer Leon Parkes said: “Cold Water Shock affects even the strongest of swimmers and can kill you in just 60 seconds. You also never know what is lurking beneath the surface – people have drowned after getting tangled up in undergrowth and other things hiding in the water.

“We don’t want to stop people having fun, however, safety is key as we continue with our mission to remind young people and their parents or carers of the dangers associated with going into open water, especially during the summer months as we spend more time outdoors.

“We are aware of incidents during recent hot spells involving people jumping into open water, such as Salford Quays. I can’t overestimate the dangers of this which is why we are absolutely committed to supporting the Water Safety Day of Action – when our firefighters will do whatever it takes to get these important safety messages across to people.”

The Water Safety Day of Action on Friday will see a number of activities take place across Greater Manchester, including water training in the River Irwell, Clifton, where volunteers will talk to passers-by about water safety, in line with social distancing guidance.

United Utilities will join GMFRS at Greenbooth Reservoir for a joint training exercise, which Natalie Lawson will be attending, with training also taking place in Pennington Flash in Leigh and other areas across the city-region. GMFRS crews will also be visiting other sites with open water and putting up new banners to warn people of the dangers.

Water safety messages are reinforced through Safe4Summer – a partnership campaign between GMFRS, Greater Manchester Police (GMP) and the 10 local authorities.