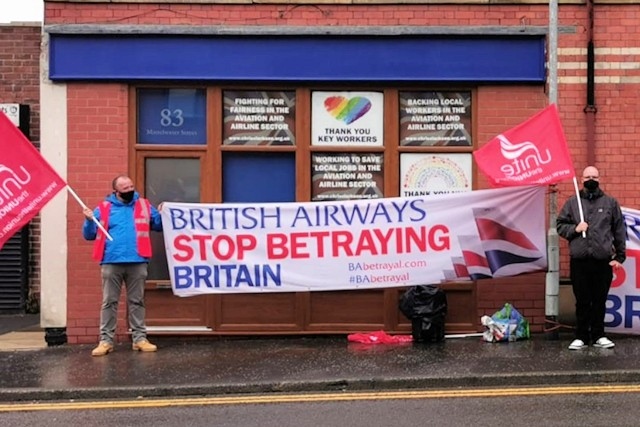 Protestors against the redundancies being negotiated by British Airways gathered outside Chris Clarkson’s constituency office on Monday (27 July).

Members of the Unite Union – which represents thousands of British Airways employees – attended the Heywood and Middleton MP’s office, calling for him to support British Airways workers amid growing anger over the company's intention to fire its workforce and rehire some staff.

Earlier this year, the airline’s owner IAG (International Airlines Group) warned it could cut as many as 12,000 jobs from the aviation industry due to the impact of Covid-19.

Staff were warned that if an agreement was not reached, they would be given notice, and rehired on a new contract, which could involve significant pay cuts and changes to terms and conditions.

Unite executive officer Sharon Graham said: "Boris Johnson’s words of support for British Airways staff and his talk of 'jobs, jobs, jobs' is empty rhetoric unless the Government acts. There must be consequences for British Airways' decision to press ahead with its plans to fire and rehire its workforce in the middle of the worst health crisis in a century.

"British Airways staff and constituents want to see action from Chris Clarkson. Public anger is growing and many MPs from across the political divide are already calling for a review of landing and take-off slots in response to British Airways' project fire and rehire. Why isn't Chris Clarkson?

"There should be consequences to British Airways’ actions. The company is essentially creating an unrecognisable airline – it should not automatically control over half the landing slots at Heathrow. It is simply wrong for British Airways to have privileged access to landing slots while its workforce is sacrificed for the benefit of shareholders. Boris Johnson needs to take back control from British Airways and fight for British jobs." 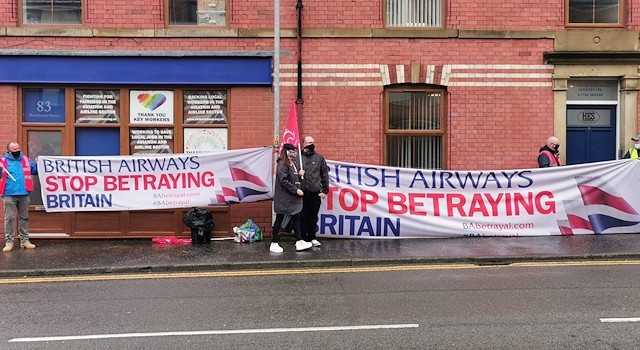 Responding to the protest, Chris Clarkson has said he “stands with staff in the aviation and travel sector in their efforts to find a solution which works for everyone” but adds that he does not support a Private Members Bill which seeks to prevent companies from adopting ‘fire and rehire’ strategies as “ultimately terms and conditions of employment are a matter for employers and employees.”

Introduced by Gavin Newlands MP, the Bill is expecting its Second Reading in September.

Mr Clarkson said: “At the heart of this issue are the people who work in all sectors of the aviation and airline industry. Not just flight staff and ground staff for airlines, but the thousands of other people who work in airports or connected industries.

“I sympathise with anyone who is facing redundancy during the pandemic. It is never an easy process to go through, and it is important that those who have been made redundant are aware of their rights. I have made it very clear that I believe that airlines such as British Airways should act responsibly and morally in negotiations, respecting employees who in some cases have given a lifetime of service to the industry.

“I am disappointed that union-led campaigns have resorted to bullish tactics that could ultimately threaten thousands of jobs. Not just at London airports, but here in Heywood and Middleton where local people depend on the employment that Manchester airport provides along with the connectivity that is a vital for commuters and businesses here.

“The Transport committee in the House of Commons has published a report on this matter and I have asked my ministerial colleagues to consider its report carefully.”

He continued: “Although I appreciate public strength of feeling, I do not support the Bill, as ultimately terms and conditions of employment are a matter for employers and employees. Companies should behave responsibly but there is already recourse for those who feel they have been treated unfairly. If an employee feels they have been dismissed unfairly, they should consider taking their case to an employment tribunal.

“It is also important to be clear that calls from Unison to block flight slots in an attempt to force British Airways’ hand in negotiations is a dangerous strategy which could actually threaten more local jobs than it seeks to safeguard. I want to reassure constituents that I have nonetheless spoken to Ministerial colleagues to make sure they are aware of the concerns of British Airways employees.

“During this difficult time, it is only right that employers should act responsibly and therefore only use the Job Retention Scheme to protect jobs. I understand that the Government is urging employers not to use the Job Retention Scheme to make someone redundant on less favourable terms than they would otherwise have received, and I reiterate my view that this is not an acceptable way for any business to behave.

“These have been through structured and bilateral discussions, at Ministerial and official levels and this is a matter which I will continue to monitor very closely.”

A spokesperson for British Airways said: “We are acting now to protect as many jobs possible. The airline industry is facing the deepest structural change in its history, as well as facing a severely weakened global economy.

“We call on Unite and GMB to work with us as our pilots' union BALPA, is doing. Working together we can protect more jobs as we prepare for a new future.”