You are Here: Home » News » News Headlines » Deprivation - not race - has been the key factor in Rochdale’s battle with coronavirus infection rates, says deputy leader

Deprivation - not race - has been the key factor in Rochdale’s battle with coronavirus infection rates, says deputy leader 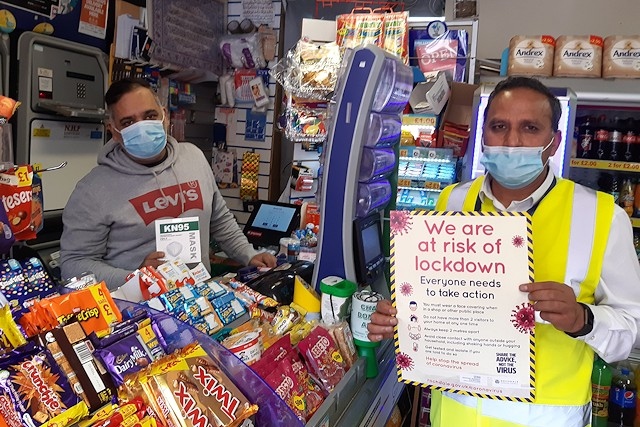 Deprivation - not race - has been the key factor in Rochdale’s battle to bring down coronavirus infection rates, says a deputy leader of Rochdale Council.

Though now falling, the borough had one of the highest rates in the country - putting it at risk of following Leicester into a local lockdown.

The council urged residents to take extra precautions - including wearing masks in shops before it became mandatory - which appear to be having the desired effect.

Three areas with large south Asian populations had been identified as being of particular concern – Milkstone and Deeplish, Kingsway and central Rochdale.

This led to some making comparisons between Rochdale and other areas with large BAME populations, such as Leicester - which was forced back into lockdown - Bradford and neighbouring Oldham.

Councillor Sara Rowbotham, deputy leader of Rochdale Council and cabinet member for health and wellbeing, says poverty - not ethnicity - is the reason for higher infection rates in these areas.

“It’s a level of racism,” she said. “They are not getting it’s about levels of deprivation, it’s about poor areas where lots of people live in one house. There are multi-generational families living in one house that are in danger of being affected.

“You become dependent on your nearest neighbour for support - so people are going in and out of people’s houses because there’s a level of dependency on them.

“Families in multi-generational households often depend on other people in their street, financially and for other kinds of support.”

Councillor Rowbotham’s point is backed up by the deprivation statistics for the borough.

According to the most recent government figures, the town centre and the neighbouring estates of College Bank and Lower Falinge are the most deprived places in Greater Manchester.

Deeplish/Tweedale Street is also among the 3% most deprived in the country, while Kingsway also performs poorly against the Office for National Statistics’ ‘indices of multiple deprivation’.

Another area which has emerged as a cause for concern is Middleton - a predominantly white area.

As with other areas that worried health bosses, parts of the township have high levels of deprivation - in particular the Langley estate.

A walk-through testing station was set up in Middleton earlier this month and Councillor Rowbotham says the same factors driving infection rates in Rochdale apply in Middleton.

“It’s deprivation,” she said. “It’s to do with poverty, multi-generational households, being dependent on each other – and even the close community stuff, being in and out of each other’s houses.”

The health and wellbeing boss organised an online ‘equalities assembly’ earlier this month, which highlighted a ‘digital divide’ and the need to communicate with all communities effectively.

“Lots of messages went out on social media and we were expecting that to be interpreted and shared in communities where English isn’t their first language, that people have got digital equipment and access to the internet,” said Councillor Rowbotham.

She adds that mosques have been doing an ‘absolutely amazing job’ in helping get key messages around social distancing, wearing masks and getting tested out to their communities.

Her comments were echoed by community leaders in the heart of Rochdale.

Shahid Mohammad Sardar, chair of Milkstone and Deeplish Area Forum, says the area’s characteristics have contributed to its problems.

High-density terraced housing, and abundance of businesses and the proximity to the train station and tram stop are all part of the mix.

“When an outsider looks into Milkstone and Deeplish it’s an easy assumption that it’s something we, as a community, are doing or not doing, but for someone born and brought up in the ward I know that it’s a much more complex situation,” he said.

“It’s not something we have done or we have not done, you need to look at the bigger picture in terms of the locality. To single out people in Milkstone and Deeplish is completely unfair.”

Mr Sardar has been part of the drive to get the message out to his community, stressing the need to take extra precautions to avoid a local lockdown.

He said: “I have been tested at the town hall and within 24 hours got a result. I was negative. The more people like me who look like them and sound like them who say ‘I have been tested, it’s nothing to be ashamed of, make sure you get yourself tested’ the better.”

Milkstone and Deeplish ward councillor Sameena Zaheer says that ‘99%’ of people are complying with coronavirus measures.

“People are trying their best, we have been out and about and most people are complying with our guidelines,” she said.

“Of course, it’s worrying, anybody in this situation would be worried, but the issue is we are a highly concentrated area of small terraced houses. For example, if you get out into your garden - a small yard - you can’t even do social distancing there.

“I have been the councillor for Milkstone and Deeplish for six years and my assessment is that any part of the country where there is deprivation and poverty is being hit by this pandemic.”

With the Islamic holy festival of Eid al-Adha taking place from this evening (Thursday) until Monday, communication is again going to be key.

The festival is a joyous time for the Muslim community, and there is usually much hugging and hand-shaking among the celebrations. Many marriages would also usually take place during this period.

Councillor Zaheer - who speaks four languages - says it is ‘sad’ that Eid will not be the same this year, but that most people were complying with council guidance.

Mosques have already put measures in place such as staggered prayer times, reduced capacities and one-way systems, while worshippers have been told they must wash at home, wear a face mask and bring their own prayer mats.

For Eid, the council is urging people to avoid physical contact with anyone outside of your own household - including shaking hands or hugging – as well as not allowing more than two visitors into their homes.

Public health bosses are also stressing the importance of wearing face coverings in public and people remaining two metres apart at all times.

Tahir Mahmood, chair of the Rochdale Council of Mosques, has addressed the borough’s Muslim community.

He said: “We have all made huge sacrifices in the past few months and I know how hard it has been for you and your families.

“Stay alert to the measures in place for our borough this Eid so that we can protect each other and stop the spread of the virus. I hope that this time next year we will be able to celebrate as we normally do. In the meantime, please stay safe and Eid Mubarak.”

Andrea Fallon, director of public health at Rochdale Council, added: “I’ve visited some of the borough’s mosques and I’ve been really encouraged by the measures they have put in place and how they are going above and beyond with a lot of measures like awareness raising sessions, deep cleaning and swab testing. It’s now down to the community to play their part and observe the measures put in place for everyone’s safety.”

“Let’s all work to stop the spread of this deadly virus.”

Those who have symptoms of coronavirus must get a test immediately and isolate at home.

They should not invite anyone to their home, go to other houses or the mosque, and should not prepare food for others.