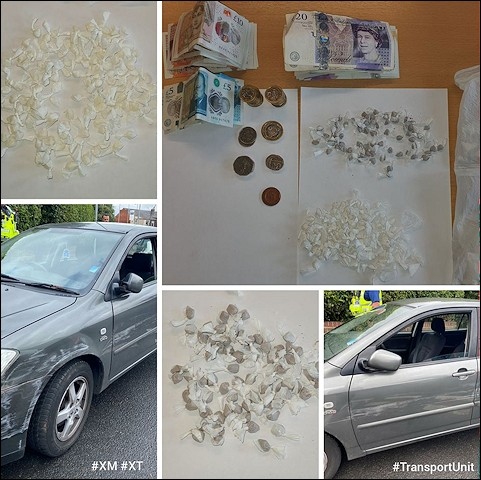 A 20-year-old man from Rochdale has been charged with a number of drug and driving offences after police seemingly witnessed a drug deal on Saturday (1 August).

Mujahid Ishaq has been charged with using a motor vehicle without insurance, dangerous driving, two counts of possession with intent to supply a Class A drug, and driving not in accordance with his licence.

When searching for a stolen vehicle, police observed what appeared to be a drug deal on Rochdale’s back streets. The driver did not stop, and purposely drove his car directly at a police officer before ramming an unmarked transport unit car. The officer narrowly avoided injury due to his quick reactions.

The driver then crashed the car before running away, jumping into a friend’s nearby getaway car – which was found just minutes later at a petrol station as it needed more fuel.

The man who rammed the police car was found hidden in the getaway car, and a search uncovered almost 200 wraps of class A drugs – suspected to be crack cocaine and heroin – a large amount of cash and other drug related paraphernalia.

Both cars were seized as they were not insured and have been sent to be crushed.

A spokesperson for the Rochdale branch said: “This is the kind of risk our officers put themselves in on an almost daily basis to protect the public from harm and bring dangerous offenders to justice, your specialist operations safer roads policing teams will continue to take these people off the roads through all means at our disposal.”

Ishaq is due to appear at Manchester and Salford Magistrates’ Court today (Monday 3 August).