You are Here: Home » News » News Headlines » Plans for a 27-acre solar farm on green belt between Rochdale and Heywood approved 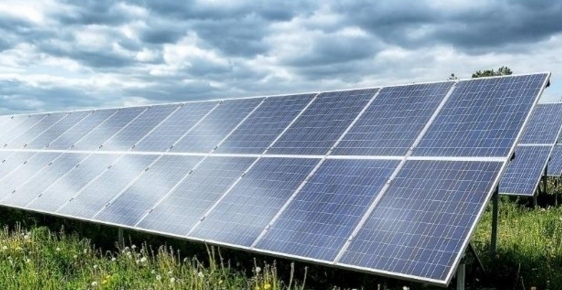 The solar farm will be installed on fields south of Chamber House Farm, off Rochdale Road East

Plans for a 27-acre solar farm on green belt land between Rochdale and Heywood have been given the go-ahead.

The site, which will generate 4,500 megawatt hours of electricity per year, is to be installed on fields south of Chamber House Farm, off Rochdale Road East.

Despite its green belt location, officers recommended approval of the plans on the grounds it would make a ‘significant contribution’ to reducing carbon dioxide emissions and tackling climate change.

Heywood North councillor Liam O’Rourke told a meeting of Rochdale Council’s planning committee the farm would be ‘massively positive’ for the vast majority of people, improving the environment and lowering bills.

She said: “Our primary objection to this development is that the site is one of the few remaining unspoilt areas of green belt forming the boundary between Heywood and Rochdale and is vitally important.”

Ms Greenhalgh rejected claims that proposed landscaping would ‘go any way’ towards mitigating harm done to the green belt, adding the farm would ‘completely destroy’ enjoyment of the area for residents and visitors alike.

She told the committee that residents of Dumfries Hollow were banned from putting furniture in the back gardens or using washing lines due to the impact on the green belt.

“I think it’s ludicrous to say that residents’ use of their rear gardens is detrimental or harmful to the green belt, then suggesting a solar farm is acceptable,” she said.

“The council has targets to meet so, all of a sudden, an enormous industrial scale development is going to be given support regardless of the harm they freely admit this will cause.”

A previous application had been approved in 2015, but changes to government subsidies meant it was not financially viable to go ahead with the project.

Simon Taylor, agent for Rochdale Development Agency, said the main difference between the two proposals was the new one boasted ‘more streamlined technology’, as well as a reduction in the number of substation buildings,  meaning there was ‘less visible infrastructure about the height of the panels on site’.

He added that there would also be an ‘overall enhancement of local ecology through ‘the infilling of gappy hedgerows, extensive tree planting and sowing and upkeep of undisturbed wildflower meadow across the site’.

The development was also ‘entirely reversible’ at the end of its 30-year lifespan, he said.

He told the committee: “In the longer term it will help to promote the principal aim of the green belt by preventing more permanent and visually intrusive residential and industrial urban sprawl that might threaten to merge the neighbouring towns of Heywood and Rochdale.”

He said: “It is a massively positive scheme for the vast majority of residents that will help offset CO2 and also protect that piece of land from other more intrusive variations of development on that site.

“A solar farm is not a factory, it will not be houses, it will be a solar farm.”

However, he acknowledged some residents would have their standard of living affected and called for residents to be consulted and kept fully informed throughout the inspection.

He also asked the applicant to explore the possibility of reducing the height of the photovoltaic solar panels but this could not be officially stipulated in the conditions.

The committee approved the plans unanimously.