You are Here: Home » News » News Headlines » Mayor of Rochdale distributes thousands of pounds worth of cheques to charities 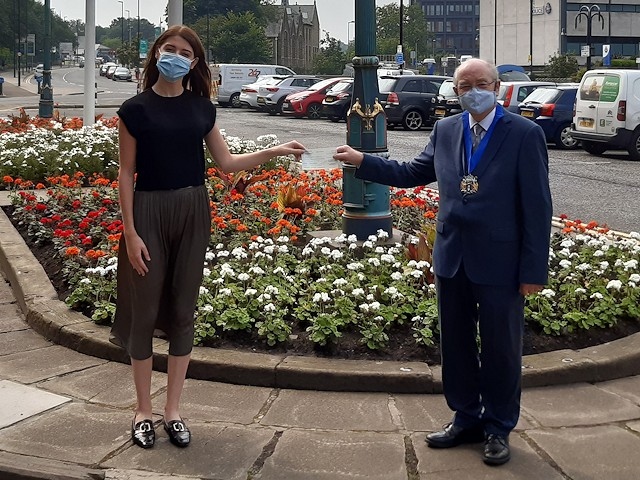 The Mayor of Rochdale, Councillor Billy Sheerin, distributed cheques to representatives from his chosen charities outside Rochdale Town Hall on Monday 10 August.

​​​​​​Each year, the sitting Mayor of Rochdale raises thousands of pounds for local charitable causes through collections and organised events such as the MP’s dinner, Manchester Waterways Cruise, musical concerts, and the grand finale - the Mayor’s Civic Charity Ball.

The Mayor’s Charity Appeal beneficiaries change every year, as every new mayor chooses causes to support which are close or important to them.

All the money raised is collected and distributed at the end of the mayoral year. For Mayor Sheerin, this was in May 2020, but his mayoral term was cut short due to the current pandemic.

He is now set to continue as the Mayor of Rochdale for another year, allowing him to continue fundraising:

The funds raised by the Mayors Charity Appeal for 2019 - 2020 were split between Springhill Hospice, Rochdale Connections Trust, Rochdale Shopmobility, Parkinson's, Leukaemia UK, Hydro Pool, M6 Theatre and Rochdale MS Society, with each receiving an amount between £1,500 and £2,500.

Jolly Josh - a charity founded locally which runs a group for young disabled children in Rochdale – also benefitted from the Mayor’s Charity Appeal after Mayor Sheerin took them on board following a visit to the facility.

Carole Kelly, founder of Jolly Josh said: "Thank you to the Mayor for supporting Jolly Josh with this generous donation, every penny will be spent on the construction of our 'place to call home', in Castleton. Due to Covid-19, our fundraising has been affected and therefore we're absolutely thrilled to recieve this funding, thank you!"

Alan Baker, treasurer of Rochdale MS Society said: "We are very grateful for the generous donation from mayor Billy Sheerin. We are all dealing with such difficult times and charities are no exception. Looking forward to the new year, we are hoping to have a welcome back celebration for all our members and their families. There are so many things that can't be predicted or planned for, but we will all get there.

"The support for anyone with MS in our area will always be ongoing regardless of whatever else is happening around us. We can be contacted anytime."

Julie Halliwell, CEO of Springhill Hospice said: "Billy has been a huge supporter of the hospice for many years, and we have been so grateful for his input into our work, and for his continued support.

"On behalf of everyone here at the hospice, I would like to say thank you to Billy for choosing Springhill as one of his Charities of the Year and making this wonderful donation to our hospice.

"The donation that we receive will help us to continue providing care to patients and their families in our hospice and also out in the community."

Bev Place from Rochdale Connections Trust (RCT)  said: "RCT were absolutely thrilled with the donation received from the Mayor of Rochdale's Charity. This is the most difficult period the charity has faced and donations like this make all the difference in allowing us to provide the supportive interventions those in greatest need in our Borough need."

Mayor Sheerin said: “The money this year was much reduced in comparison to previous years due to the pandemic, meaning some of the biggest mayoral events, including my civic charity ball which I was so looking forward to, had to be cancelled.

“Nevertheless, I am grateful for the fundraising events I was able to hold throughout my mayoral year and to the committee of volunteers who helped with the organisation and running of all the fundraisers. I could not have raised the amount I did without members of the Mayor’s Charity Committee who brought new ideas of fundraising to the table every week.

“I’m also grateful and so pleased that the public were so generous and supported my appeal.

“Even though I’m continuing for another year, I wanted my chosen charities to benefit from funds now given the current circumstances, so I am starting off the Mayor’s Charity Appeal again. We are trying to think of other ways to fundraise whilst adhering to social distancing rules.

“I love supporting local causes and it is important we continue to raise much-needed funds for them to be successful.”

Mrs Dulcie Bolton, chair of Parkinson’s Rochdale branch said: "We would like to say a huge thank you for this generous gift from the Mayor's Charity Fund  At the moment we are unable to meet  or do any fund raising. Hopefully we may all get together soon."