You are Here: Home » News » News Headlines » Leaders urge government to keep tighter restrictions in place for another week 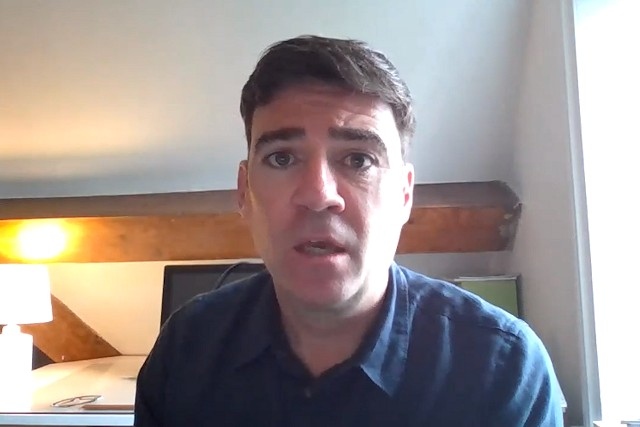 Greater Manchester leaders have urged the government not to relax tighter regional restrictions given that the number of Covid-19 cases is still rising in some boroughs.

They said enforcing a Leicester-style lockdown in Oldham, where infection rates have climbed to more than 100 Covid-19 cases per 100,000 people, would be ‘extremely challenging’.

The letter to Mr Hancock also cautions against the reopening of venues like casinos, bowling alleys and ice rinks while showing support for the return of close contact services in the beauty industry.

A decision on the possible extension of the stricter rules, which are reviewed on a weekly basis by the government, is expected later today (Thursday 13 August).

“It shows that the government was right to suggest two weeks ago further restrictions on social gatherings in the home and we supported that, and continue to support that.

“But we clearly need to bring the numbers down in a number of our boroughs, so the message I’ve got today is that everyone needs to get more serious about doing what we can to bring the situation back to a better level.

“In the end this is about everyone’s health in Greater Manchester.” 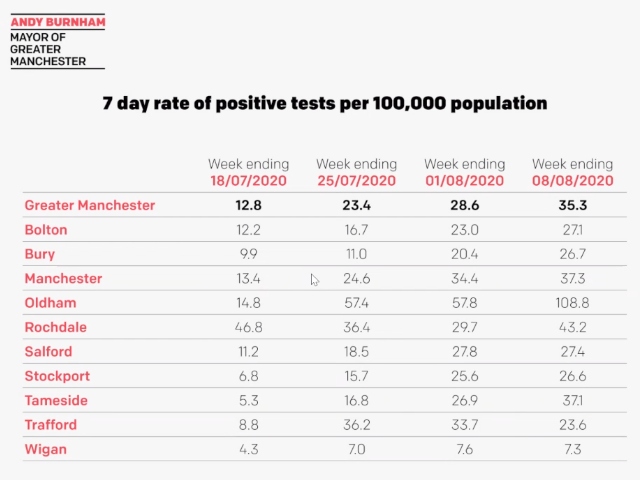 Mr Burnham said there would be ‘more boots on the ground’ committed to Oldham, which has ramped up testing to around 1,000 tests a day.

Public health experts have told leaders that Oldham council was currently doing what was needed to keep the current situation under control.

Sir Richard Leese said: “There’s no apparent pattern or major outbreaks in workplaces that could account for a significant increase, and most of the transmission is in homes which is difficult to identify.

“As that intensive test and trace work goes on that ought to provide us better evidence of what is happening in Oldham, and if we are to support any different measures, it would be using that evidence.”

In Wigan, where the infection rate is around seven cases per 100,000 population, there have been growing calls for the restrictions to be lifted in the borough.

Mr Burnham revealed the latest 1,331 tests per 100,000 carried out in Wigan is the lowest in the city-region, with the highest being 2,415 in Rochdale.

He stressed that the approach in Wigan was a ‘preventative one’ given that cases have continued to rise in neighbouring Bolton and Salford.

“If the picture continues to be different on one end of Greater Manchester of course we would have a dialogue with the government about what to do about that,” he said.