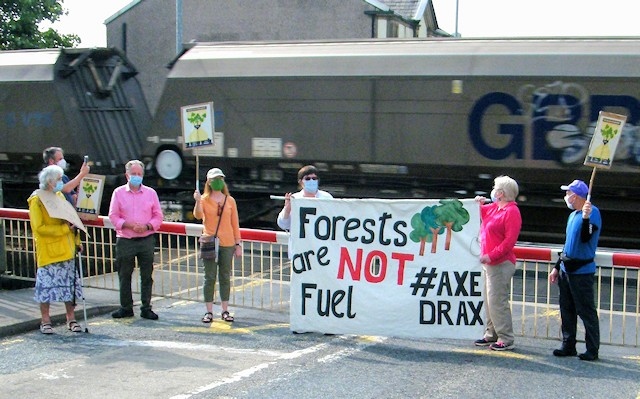 The protest was one of 10 co-ordinated across the North – the AxeDrax campaign – opposing the trains carrying trees which were to be incinerated at North Yorkshire’s Drax Power Station, the UK’s biggest power plant.

The Axe Drax group includes campaigners from Extinction Rebellion and community groups from across the North of England.

Observing social distancing guidelines, local protestors from ages 10 to mid-80s gathered at 4.09pm - the same time the train passed through the station – holding banners and placards, explaining to road users why they were making a stand.

The campaigners explained that they not only protest the environmental damage caused by tree burning, but also the impacts on human lives.

They argue that ‘supposed bioenergy solutions’ often have the same fatal flaws associated with fossil fuels; they hurt low income BIPOC (Black, indigenous and people of colour) communities the most and serve to perpetuate environmental racism.

Jane Touil, of Rochdale, said: “The reason I attended is because we are all being conned.

“They tell us they are burning a green fuel but in fact it’s causing the destruction of wetlands, primary forest, in the south USA. I want them to be honest with us, stop burning trees and invest in real green energy.”

“The slogans on all the wagons look really progressive 'Biofuels - powering the future’ and 'Pioneering the Northern Powerhouse'. When I looked into it, I discovered it was greenwash [misleading information about how a product is more environmentally friendly]. 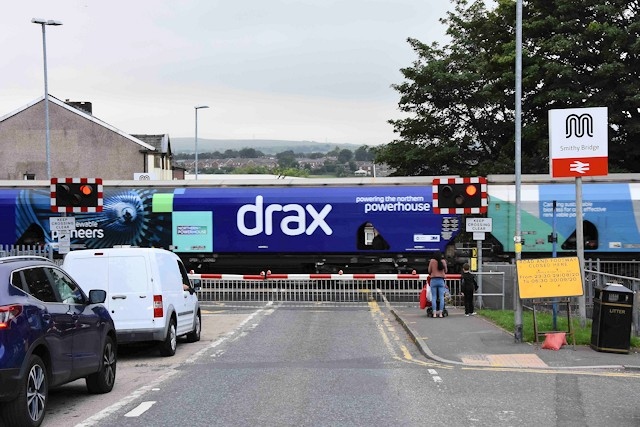 Guy Otten, a retired lawyer from Littleborough, said: “I am making this protest for my grandchildren and their generation. We are leaving them a dying planet. Greenhouse gases are not just heating the planet; they are causing a runaway chain of eco disasters which could mean half the human population and much of life on Earth could perish.

“It is a sobering thought; we must act to stop this disaster.”

The Axe Drax protestors are demanding three courses of action; for the government to transfer the £789.5M in subsidies for the power station to be transferred to renewable energy, stop Drax building Europe’s biggest fossil-fuelled gas power station, and end what they call “the most comprehensive and dangerous” greenwashing by a power company.

Participants are also sharing photos on social media and contacting their MPs to ask them to support the new Cut Carbon Not Forests campaign - calling on the government to transfer around £1 billion in UK renewable subsidies from tree burning in UK power stations like Drax to ‘genuinely renewable energy’, including solar and wind power.

According to Drax’s own annual report in 2019, that same year, the power station burned over seven million tonnes of wood pellets. The same report says CO2 emissions at Drax Power Station in 2019 were less than one million tonnes for the first time.

Drax, which is aiming to become a carbon negative company by 2030, claims this is a 97% reduction since 2012, and that its power station is now the UK’s largest source of renewable power generation, having have two thirds converted to run on ‘sustainable biomass’.

However, several scientific studies and environmental non-profit organisations say burning wood pellets release as much, or even more, CO2 as burning coal.

Responding to a request to comment, a Drax spokesperson said: “Drax is the UK’s largest renewable power generator, using sustainable biomass to generate the electricity that powers millions of homes and businesses.

“Since converting two thirds of the power station in North Yorkshire to use sustainable biomass instead of coal, we have delivered carbon savings of more than 80%, making Drax the largest decarbonisation project in Europe. And by pioneering bioenergy with carbon capture and storage (BECCS) we could go further - delivering on our world-leading ambition to be a carbon negative company by 2030.”

Drax says its US and Canada imported wood pellets come from “sustainably managed working forests and residues from forest industries” and is compliant with “appropriate legislation through a combination of proactive supplier engagement, third-party certification schemes and our own audits and checks.”

Its aforementioned 2019 report says almost 40% of its wood pellet stock comes from sawmill residue, 30% from thinnings, branches, tops and bark, and 30% from low-grade roundwood.

Drax adds that the biomass used is low-grade wood which would otherwise go to waste, and that sustainable biomass is renewable because of a closed carbon cycle created when trees grow and absorb CO2 from the atmosphere.