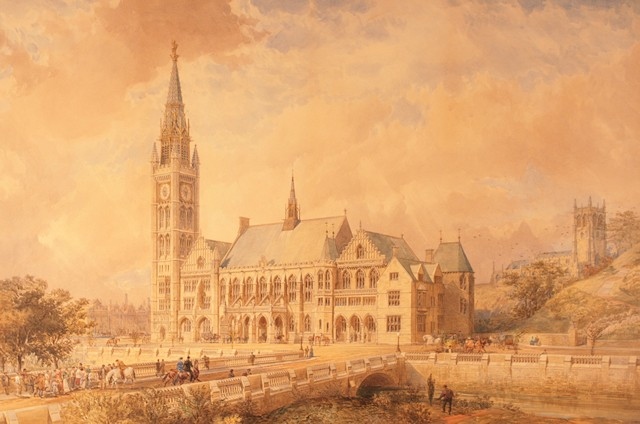 Rochdale Town Hall with its original clock tower and spire

Mystery surrounds the life of the architect of Rochdale’s glorious town hall but a new book is throwing light on him.

The first full-length biography of William Henry Crossland, written by Sheila Binns, will be published on 24 September by the Lutterworth Press. This account enables, for the first time, an appreciation and understanding of Crossland’s life and work, with new photographs and contemporary images illustrating the book.

Born in Huddersfield, Crossland had a privileged start in life and training under George Gilbert Scott gave him a certain status. His busy practice in the West Riding established a good reputation designing churches and secular buildings.

Although incorporated as a borough in 1856, it was 1863 before a town hall for Rochdale was agreed. In 1864, from among 27 hopefuls, Crossland won the architectural competition to design it. £20,000 was allocated and the site beside the River Roch purchased.

Existing town halls were visited to learn how constructing such a building had been approached. The size and quality of these civic palaces persuaded officials that the £20,000 earmarked was insufficient for the civic statement Rochdale wanted to make.

By a considerable margin, this became Crossland’s most important commission to date. A virtually unknown Yorkshire architect, aged only 30, his design had stood out from the others.

Elaborated designs sent costs spiralling, reaching an extraordinary £154,755, but the Mayor justified the huge expense, saying that one cannot have beauty without paying for it. The Town Hall was officially opened on 27 September 1871, ablaze with gaslight. The local newspaper likened its spectacular glory to the House of Lords and congratulations showered upon Crossland.

Described as one of the dozen most ambitious High Victorian town halls in England, Rochdale’s remains one of the finest in the country. Crossland’s decorative scheme was ambitious. Drawing on mythical and naturalistic motifs as well as local history and industry, he achieved an extraordinary richness of decoration including a carved representation of himself in the Mayor’s Reception Room.

A tower with a spire on a civic building was a luxury afforded by few towns. Original drawings show a modest tower but Crossland added stage after stage until it was 240 feet high, topped by a gilded statue of St George and the Dragon. Rochdale was growing rapidly through wealth generated by the textile industry and the tower, alongside the magnificent Town Hall, made an enormously strong statement of confidence and pride. The present tower, by another architect, was added after the original was destroyed by fire in 1883.

When the Town Hall opened, Crossland had already moved his office to London, although he continued to take on work in Yorkshire. Winning another competition - to design an asylum in Surrey for the phenomenally rich entrepreneur Thomas Holloway - was to change his life utterly. Holloway Sanatorium was barely begun when the patron began planning a second grand project, which he offered Crossland without a competition. This was to become Royal Holloway College in Egham and Crossland somehow managed both projects at the same time.

This chronological biography has glimpses of Crossland’s private life and discussion of his building projects. He won the long-term confidence of wealthy patrons, which yielded large dividends. The superlative building that Crossland designed for Rochdale, as well as the Holloway Sanatorium and the Royal Holloway College, of 1885 and 1886 respectively, all now listed Grade-1, made Crossland famous.

The book can be purchased directly from the publishers at: