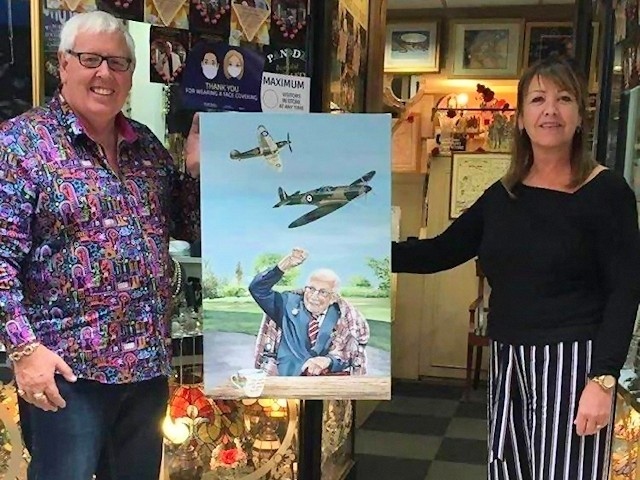 Limited edition prints of a Sir Captain Tom Moore painting by a Middleton artist are being created to raise money for charity.

The original artwork by Lisa Haselden  was auctioned off to raise money for the NHS – with Rochdale’s singing jeweller John Swinden winning the original acrylic canvas of the 100-year-old World War Two veteran.

Sir Tom was knighted this summer after walking 100 laps of his garden to raise millions of pounds for the NHS Charities Together.

After winning with seconds to spare, John paid £620 for the painting, sold on a popular online auction site, with the proceeds going to the NHS.

The painting depicts Sir Tom in his garden, as two wartime fighter planes fly overhead. A mug with an NHS heart logo sits on the table in front of Sir Tom.

Lisa, who is also a carer, presented John with the painting on Wednesday 19 August.

John said: “I’m thrilled to bits; I was really excited to win.

“One reason I bid was because Sir Tom is amazing, and because the aeroplanes caught my attention.”

In the original online listing, artist Lisa said: “Sir Captain Tom's amazing achievement inspired me to paint him as a reminder of his remarkable fundraising efforts.

“His generation of selfless, hardworking and brave people who never gave up and strived so hard for the generations to come are still proving their grit and determination by supporting our very own NHS heroes who are continually battling and working hard to get us through this horrendous pandemic.”

Now, John has arranged – with Lisa’s permission – for 1,000 limited edition prints of the painting to be sold – also raising money for charity.

John’s chosen beneficiaries will be Springhill Hospice and the East Lancashire Masonic Charity.

Lisa added that a further inspiration behind the painting was her own father, who sadly died of a heart attack when she was just 19. Also a war veteran, Lisa said she realised she had never really asked him about the way, and that he had encouraged her artistic abilities from a young age, buying her oil paints.

Lisa's chosen beneficiary from the prints will be the British Heart Foundation, in memory of both her parents. Her mother also sadly suffered a heart attack 18 months after Lisa's father.

If you’re interested in owning your own copy of Lisa’s original artwork, please call John at J&D Alexander Jewellers on The Walk – 01706 656021 – or pop into store between 9.30am and 4pm Wednesday to Saturday.