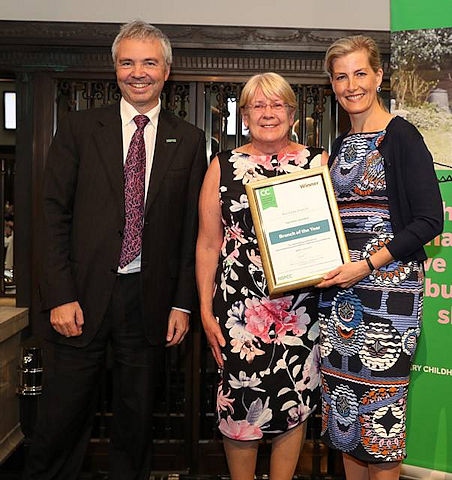 In 2016, the Rochdale Branch was crowned NSPCC Branch of the Year at the charity’s first ever Childhood Champion Awards

The NSPCC Rochdale and District fundraising branch is celebrating its 130th birthday by asking local businesses to each raise £130 for the children’s charity.

The branch is celebrating 130 years of supporting the NSPCC, reflecting on all kinds of fundraising activities spanning more than a century.

The branch covers Rochdale, Heywood and Littleborough and raises around £35,000 a year for the children’s charity through fundraising events such as lunches, garden open days, treks and runs, flag days, cycling, carol singing, and much more - establishing themselves in the heart of the community.

This year, as they celebrate thirteen decades of fundraising, the branch is appealing to local businesses and individuals to each aim to raise £130 to mark the special occasion. £130 would help Childline answer 32 more calls from children who are worried or scared.

The branch first came about after the Rochdale Aid Committee of the NSPCC was established in 1890, and the first Inspector took up post based on 19 Milkstone Road. To support his work, the branch raised £86 1s. 6d. in the year to 31 March 1891.

Another highlight came in the early 1930s when Gracie Fields, who was born in Rochdale, performed at the Rochdale Hippodrome, raising £20 for the local branch.

More recently, in 2016, the Rochdale Branch was crowned NSPCC Branch of the Year at the charity’s first ever Childhood Champion Awards. They were presented with the award at The Banking Hall by Royal Patron of ChildLine and NSPCC President, HRH The Countess of Wessex, alongside Childline founder Dame Esther Rantzen and NSPCC Chief Executive Peter Wanless.

Bob Chadwick, Chair of the branch committee and avid supporter of the NSPCC, said: “We are thrilled to be celebrating the branch’s 130th birthday. Even though the pandemic has caused rather extraordinary circumstances, with our main fundraisers cancelled, we are still proud to celebrate the vibrant history of our committee.”

Branch and district fundraising teams, like Rochdale, have had to cancel their major summer events during the lockdown. The branch would usually have held its Ascot event, in July, which raises around £6,000 for the NSPCC.

Bob added: “We’re really hoping that local businesses in Rochdale can back us on our birthday, to help us raise as much as we can for the NSPCC on what is a very special year for us.

“Knowing that we’ve helped even one child is the best birthday present we could have.”

Vickie Butcher, Community Fundraising Manager for the NSPCC, said: “The Rochdale branch members do so much for the NSPCC, and it’s fantastic to see this celebration of their loyalty and passion.

“They seize opportunities, build fantastic relationships with the local community, showing commitment and enthusiasm; making a huge impact in the local area. On behalf of the NSPCC, I wish them the happiest of birthdays.”

Bob added: “We would love to see younger members of the community get involved with fundraising. Not only can it provide invaluable skills, but members also know that their efforts directly help the charity to support more children.”

With their long history and success in fundraising, the branch is still dedicated to making an impact during what has been the NSPCC’s biggest challenge in decades.

If you are interested in getting involved with the historic branch, you can email northappeals@nspcc.org.uk for more information.