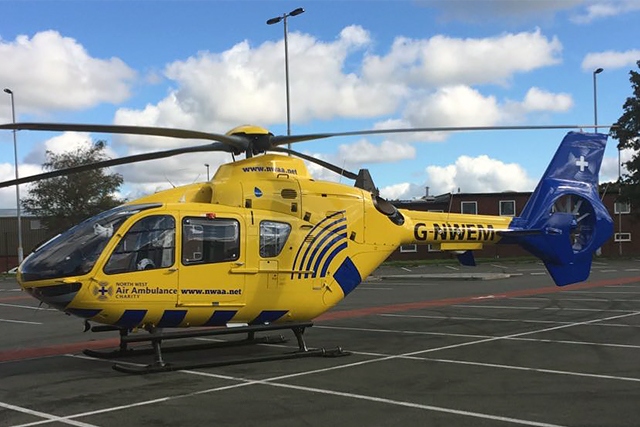 With three helicopters and four rapid response vehicles across its Barton and Blackpool air bases, the charity’s crew of highly skilled specialist doctors and helicopter emergency medical services (HEMS) paramedics can deliver enhanced medical care to the most critically ill and injured patients – like Alex Rose.

Alex, 24, of Preston, was attended to by NWAAC in March 2019, whilst out on his motorbike. Alex was going at a careful speed, however, coming up to a blind bend, his bike skidded on stones in the road – throwing the bike to one side and catapulting Alex into an iron fence in a nearby field and knocking him unconscious. When he awoke, he saw the helicopter descending.

The accident left him with three broken back bones, six broken ribs, a fractured sternum, bruised lungs and a painful gash along his arm. Two HEMS paramedics from NWAAC were able to stabilise Alex at the scene, to ensure no further damage was done – his broken back bones had missed his spinal cord by just 1mm. They administered pain relief before carefully airlifting Alex to the Royal Preston Hospital in ten minutes, for scans and further treatment. Alex was miraculously discharged four days later, despite his initial extensive injuries.

He said: “Waking up and seeing the helicopter land was when I realised how serious a state I was in. I think the adrenaline was kicking in though, because I kept trying to get back on my bike. Even a slight movement risked even worse injuries and pain, and I’m so grateful the air ambulance was there to calm me down and treat me.

“Being in such a remote spot, which was difficult to reach by car, I’m sure I wouldn’t have recovered as quickly as I did without their care, they were amazing. They knew exactly how to handle me and get me the treatment I needed as quickly as possible. I don’t know whether I would be fighting fit today without the charity.”

In cases of serious trauma or illness, the crew are able to administer highly advanced interventions before reaching the hospital, such as anaesthesia, blood transfusion or intubation. It can make the difference between life and death for many patients.

As a charity funded operation, NWAAC must raise over £9.5m a year, relying on generous donations, fundraisers and volunteers to maintain its 365-days-a-year service.

Heather Arrowsmith, CEO at the charity, commented: “Hearing from patients like Alex really drive home how important the charity’s work is. Our crew are out there every day, having a life changing impact on patient’s lives, and it just wouldn’t be possible without the incredible support we receive.”

“The nature of our work means there will always be patients in need, and public support, no matter how big or small, makes an incredible difference to this work. It keeps our helicopters in the air, our rapid response vehicles out on the road, and provides vital funds for research into how we can adapt our service to make sure we’re always improving the impact we have on patient’s lives.”

“In our 21st year of service, and our 8th year celebrating National Air Ambulance Week, it’s amazing to take stock and see how far we have come, and it simply wouldn’t have been possible without the support we’ve received over the years.”

The North West Air Ambulance Charity’s helicopters fly 365 days a year, with the doctors and paramedics on board providing rapid treatment and hospital transfers to patients across the entire North West region each year – an area covering 5,500 square miles and 8 million people.

Since it launched in 1999, the charity has flown more than 17,000 missions across the region, with the ambulance called out an average of five times a day, rising to ten in summer.

For more information on the North West Air Ambulance Charity or to donate, please visit www.nwaa.net or call 0800 587 4570.