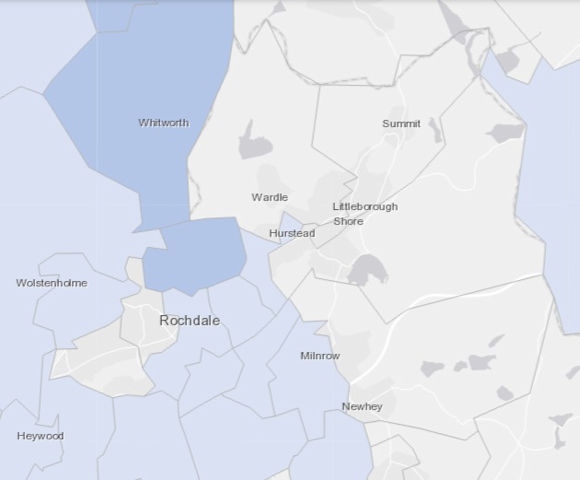 An area of Rochdale has emerged as a current coronavirus hotspot, during a week that has seen it placed under ‘red alert’.

Healey, Syke and Shawclough recorded 14 cases during the week ending September 3, according to the latest figures from Public Health England (PHE).

Situated to the north of the borough, it is the only area to have recorded double figures during the seven day period.

It borders Whitworth, in Rossendale, which recently saw a spike linked to an outbreak at an out-of-hours school club.

However, Healey councillor Kieran Heakin believes there is unlikely to be a link between the two neighbouring areas.

Instead he points to a growing complacency – particularly among the younger generation – and too many people flouting guidelines around masks and social distancing.

“I see many examples of people not respecting those rules in shops, offices, and while socialising – I think it’s as simple as that,” he said.

And he says youngsters – particularly those in their teens – have been lulled into a false sense of security during lockdown.

He said: “I think young people have been lulled into complacency over the summer. It has been six months from March and they have been tied down and stuck inside, they have got a bit fed up.

“I think it’s just being complacent. They have been in lockdown too long, they think it’s time they had a bit of ‘me time’, but they’re not respecting the rules.”

Councillor Heakin added: “Children do what their parents say, I think it’s the teenagers that have had enough of it – that’s my suspicion anyway.”

The children’s services boss, whose adult son was hospitalised with the illness and ‘took a long time to recover’, said people should not treat coronavirus lightly.

“There’s a reason for the rules, it’s to prevent you getting what can be a very serious illness. There’s so much we don’t know about the disease at the moment.

The borough has moved into red alert territory after cases shot up to nearly 60 per 100,000 – the fourth highest in Greater Manchester behind Bolton, Oldham and Salford.

It was the region’s most significant increase in cases, rising from 49.5 on Sunday, to 59.8 on Monday.

However, Councillor Heakin says that, in his experience, most Rochdalians are keeping to the guidelines.

“The majority of people are following the rules carefully and properly. They are doing a good job, but you get a few individuals who think they are above the law.” he added.

Elsewhere in the borough, cases were relatively low, with no other areas recording double figures.

There were nine cases in Central Rochdale and Mandale Park as well as in Castleton and Trub, while eight cases were recorded in Deeplish.

But several areas saw between two cases and none, including Spotland Bridge, Springfield Park and Milnrow East and Newhey.

The sharp rise in the overall infection rate, however, suggests that the virus is now present across the borough, rather than being concentrated in central areas as has been the case previously.

The Public Health England map can be found here: