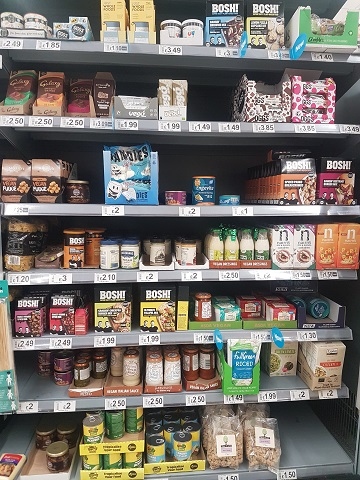 The vegan bay at Rochdale Asda

The Rochdale Asda store has become one of over 350 stores to launch an exclusive vegan section in store.

Currently covering one bay on the Free From and pasta aisle, the dedicated plant-based section is the first by a UK supermarket, stocking new products by well-loved brands such as Mrs Crimbles, Vego, Bosh!, Galaxy and Horlicks.

Asda says the new vegan section will consist of one bay of savoury products including proteins, cooking sauces and condiments, and one bay of snacks and sweet lines – meaning those who don’t consume animal products will have an easier time looking for ingredients as they will be grouped together for convenience.

Rochdale Online spoke to several local vegans, who have largely supported the initiative, saying it 'will make shopping easier' as well as 'showing a better choice of what’s available for vegans'.

One told us: “I think it’s a good idea. I hope it will be implemented in more places and that more supermarkets follow suit.”

However, one vegan had mixed feelings, saying it was great for convenience, but was concerned non-vegans would just avoid the section because of its labelling. She said: “I just think it’s great for convenience and demonstrating that there is a range of products but I’m also concerned that segregates the vegan products so that non-vegans will just avoid it and not get to try anything new.

“It probably would be better if they marked it on the barcode on the shelf sticker.”

Sarah Thornewill, Asda’s Buying Manager, commented: “We understand that customers want a quick and simple shopping experience, and this shouldn’t be restricted by dietary requirements.

“By merchandising all our vegan items together, we hope to save customers time and offer inspiration, whether for those following a plant-based diet, or those looking to reduce their meat consumption.”