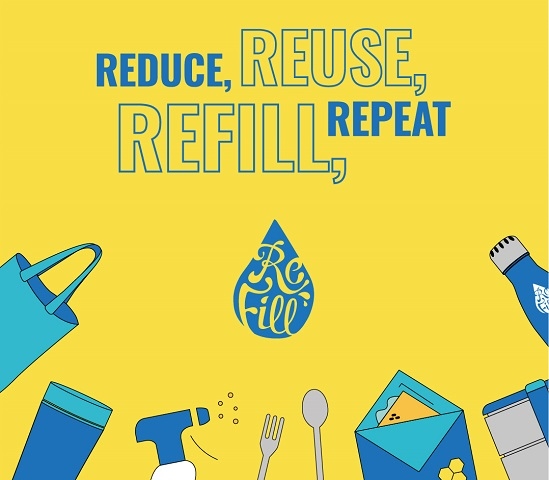 Plastic pollution campaigning organisation, City to Sea is taking the award-winning Refill campaign to the next level with a free new app to help you reduce your plastic consumption.

Along with thousands of independent businesses, including over 100 zero-waste and packaging free shops like local butchers, bakers and green-grocers, there are several leading retailers and brands involved including LUSH and Morrisons.

As of Thursday 1 October, people can use the free app to find places to refill their coffee cup, lunchbox, groceries and even cleaning products and toiletries, making it the world’s first dedicated app to helping people find where they can bring their own containers and refill – shunning single-use plastic for good. It will also highlight discounts available, rewarding consumers for reducing packaging.

In 2019 research revealed that 75% of the British public bought their lunch on-the-go each day generating a mind-blowing 11 billion items of packaging waste a year – averaging a whopping 276 items per person every year. Research has shown 93% of the British public are still worried about plastic pollution,  more than half say they are actively trying to buy groceries that are not sold in plastic packaging and 75% are willing to use refill services.

Packaging from take-away food and drinks is a major threat in the fight against plastic pollution and items like coffee cups and take-away containers are consistently in the top 10 items found on beaches around the world. A global report launched in August revealed that food wrappers are now the most found item on beaches around the world overtaking cigarette butts for the first time.

The pandemic has also seen many cafés and retailers temporarily stop the use of reusables and increase the use of single-use plastic, despite over 100 health experts stating reusables are perfectly safe to use. An estimated 1,290 tonnes of plastic could be prevented from entering the environment each year through the use of reusable food containers when purchasing takeaway food. Coffee house Starbucks has started to accept reusable takeaway cups once again, one of the few chains which has. Incidentally, the Starbucks on Manchester Road is the most popular refill site in the Rochdale borough.

The expansion of Refill to food and household goods coincides with the long-awaited ban on plastic straws, cotton buds and stirrers which came into force the same day in England.

Rebecca Burgess, CEO of City to Sea, said: “The expansion of Refill marks a positive and significant step in tackling the mountains of avoidable single-use waste created every day.

“We know we can stay safe and look after the planet, and at City to Sea we want to make it easier for people to eat, drink and shop without the pointless plastic. From a coffee on your commute, to drinking water on the go, or even shopping with less packaging, Refill puts the power to reduce plastic at your fingertips.”

Refill stations can be found across the borough at:

Forward thinking businesses can sign up as a Refill Station by registering for free on the app.

Download the free app here to find out where to fill up: https://refill.org.uk/get-the-refill-app/