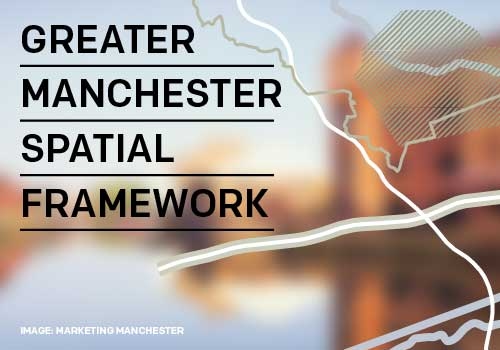 Council leader Allen Brett has declared himself ‘unapologetic’ about the scale of Rochdale’s ambition after the latest version of the region’s development masterplan came to light.

The third – and final – iteration of the highly contentious Greater Manchester Spatial Framework, includes proposals for more than 10,000 new homes and 700,000 square metres of employment space in the borough.

The council says the plans would create more than 11,000 new jobs and boost the economy by £700m a year – and are essential if the area is to prosper over the next two decades.

Councillor Brett said: “We’re unapologetic about the level of ambition we have for our borough and its residents because we want them to have the same access to good jobs and high quality housing that people in historically more prosperous parts of the city region have always enjoyed.

“The economic effects of the coronavirus outbreak means we need to do even more to protect and grow our local economy and opportunities for our residents.”

Despite the scale of the plans, slightly less green belt would been taken up by these proposals that the previous ones.

The overall proportion of land in the borough classed as green belt would stand at 60.3% – as opposed to 59.9% in 2019 - the highest in the conurbation.

The full masterplan was due to be published on Monday 5 October, but an 11th hour row between Stockport and Tameside has delayed things once more – and could yet scupper the entire project.

However, according to a leaked draft seen by the Local Democracy Service, there have been some notable changes to Rochdale’s plans since it last went out to consultation in early 2019.

Kingsway South has been ditched from Rochdale’s proposals altogether, meaning 80 hectares of green belt land previously earmarked for development will be retained.

Planners had wanted to build 182 homes and create more than 130,000 sq metres of employment south of Junction 21 of the M62.

But it is understood it is the only site not to have attracted developer interest due to the associated infrastructure costs.

While still in the blueprint, plans to extend Stakehill Business Park have also changed considerably.

The number of homes on the site has increased from 900, to 1,680 and bosses now want to create a ‘garden village’ at the site, similar to the one at Woodford, in Stockport.

The same developer, Redrow Homes, is understood to be in talks with the council.

Efforts will be made to separate residential and employment traffic as much as possible, and the possibility of a lorry park is being explored.

There will also be a wedge of green belt between the A627(M) spur and Thornham Lane, which separates Rochdale and Middleton, while proposals for a new railway station at Slattocks are being worked up by transport planners.

The Northern Gateway joint allocation with Bury remains the game-changer for Rochdale. As well as 1,000 new homes in south Heywood it also boasts an ‘advanced manufacturing park’ between junctions 18 and 19 of the M62 expected to attract ‘international level investment’.

But a massive expansion of Simister and Bowlee – also part of the Northern Gateway vision – has been significantly scaled back.

The number of new houses has been cut from 2,700 to 1,500 and The Local Democracy Reporting Service understands that Rochdale has reduced 600 homes planned for its side of the border to 200.

At Trows Farm, in Castleton, however, the number of homes has gone up from the 360 proposed in 2019 to 550 under the current masterplan.

This is because the previous proposals included space for a new primary school, but bosses believe this can now be provided elsewhere in the area – potentially at the former Carcraft site on Nixon Street.

Further work undertaken by planning officers has indicated the site can support an extra 190 properties.

And the number of homes proposed for the Roch Valley, in Littleborough, has been scaled back still further – from 210 to 200 – having been earmarked for 300 properties in the original 2016 draft.

According to the new GMSF, the scheme should be designed to allow for the eastern section of a proposed residential relief road between Smithy Bridge Road and Albert Royds Street.

Improvements to walking and cycling in the area – including links to public transport connections – are also included in these proposals.

Elsewhere the plans are not significantly different to the version which emerged in January last year.

Since that document went out to consultation more than 240 homes for affordable rent have been built in the town centre.

Plans are also in the pipeline for hundreds of homes at the flagship Riverside development, Central Retail Park and a brownfield site in Castleton.

Councillor Brett added: “We’ve always operated a brownfield preference policy, and we’ve secured millions to repurpose derelict sites since last year, but it’s only been possible to secure this funding because we’ve been able to prove to government that we have a proper plan in place to meet the housing and employment needs of our population over the next two decades.

“Unfortunately this will require some green belt release, but we’ve reduced green belt take since the last consultation and well over half of our borough will remain green belt, even if this plan is adopted in its entirety.”

Councillor John Blundell, the council’s regeneration chief, said: “The spatial framework gives us a historic opportunity address the disparity between the north and the south of the city region, by attracting new businesses and jobs to bring Rochdale’s employment and salary levels in line with other boroughs.

“As well as bringing forward in excess of 10,000 new jobs, these plans will create the kind of roles which will enable people to access highly skilled and highly paid jobs within the borough.

“We’ve already achieved early stage funding to develop an Advanced Machinery and Productivity Institute (AMPI) at Kingsway and we have plans for an advanced manufacturing park at Heywood, with university links.”

There’s a new kebab in town as one of the most famous kebabs in the takeaway game has arrived in Rochdale with the opening of Xotica BadBoy Kebabs Rochdale on Wednesday (25...

Join us, we currently meet virtually on Monday nights to chat, catch up with each other and plan where best we can help in the local community. You would be made very welcome. Click here to find out more.
Win a signed copy of Butcher Boy book