You are Here: Home » News » News Headlines » Fundraiser for pet dog attacked when playing in park

Fundraiser for pet dog attacked when playing in park 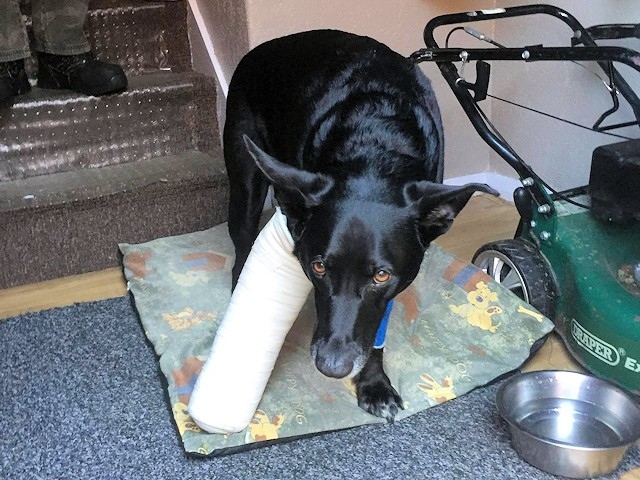 A fundraiser to help a Rochdale man with vet costs after his dog was attacked has been launched.

Bernard Mort, who has himself recently recovered from cancer, was in Balderstone Park on Friday 11 September with his beloved 10-year-old dog, where they were playing with Marley’s ball.

Unfortunately, a dog came over and attacked Marley – breaking his leg.

Bernard recalled: “The dog wasn’t on a lead. The owner had his head in his phone and wasn’t bothered.”

Weak from treatment, Bernard was unable to lift Marley into the car to take him to the emergency vets in Bury, with a neighbour stepping in to help.

Marley was rushed to the emergency vets where he underwent an urgent operation. After a check-up a week after the initial operation, Marley’s leg began to gush blood later that night. He was rushed to the vets and the bleeding stopped, before the same thing happened again.

“We thought we had lost him,” Bernard said. “He lost so much blood.”

Vets decided to remove the rods inserted into Marley’s leg in the first surgery and replace them with plates.

Due to the mounting veterinary costs, kind neighbours and friends of Bernard’s started a fundraiser campaign to help ease the financial and mental burden of the attack on Bernard, and his partner.

Bernard said: “When I first took him to the vets, they quoted £3,000 for the operation, plus x-ray and further costs. The other option wasn’t an option for my best friend. I told them I didn’t have that kind of money, and took Marley to the animal trust in Bolton where the operation was half the cost.

“I would like to thank everyone who has donated to help me with Marley. I am overwhelmed and amazed at people’s generosity and kindness, especially in these times.”

Under the Dangerous Dogs Act, it is illegal for a dog to be ‘out of control’, bite or attack someone. It is also an offence for a dog to attack an assistance dog, but not for a dog to attack any other animal, including pet dogs. However, a court could prosecute if a person believes they would have been injured if they tried to stop a dog attacking their animal.

If your dog is attacked by another dog, the incident should still be reported to the police immediately.

The PDSA (People’s Dispensary for Sick Animals) has some useful advice on what to do if a dog attacks you or your pet, or if your dog attacks another:

Bernard says he did report the incident to the police, as he considered the attacking dog to be dangerous. He says the man and dog have also been seen on Oldham Road and Broad Lane – again without a lead.

Following a spate of incidents and antisocial behaviour in Balderstone Park, measures are underway to install CCTV cameras to help improve the park’s safety, a move welcomed by Bernard.

Ward councillor Daniel Meredith confirmed that public request for cameras, backed by the police and safer communities partnership teams, will go through the relevant council department.

He is also urging residents to report any and all incidents to the police and/or the council.