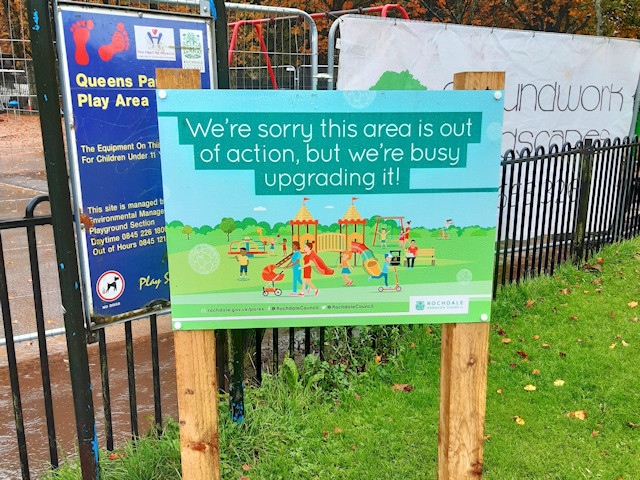 A new castle-themed play unit is set to feature as part of major upgrade works to the main play area at Queen’s Park in Heywood.

Work is now underway on the play area which will feature a brand-new castle-themed play unit as the focal point, other new play equipment will include musical play pipes for sensory play as well as an inclusive roundabout and floor level trampolines.

A brand-new separate toddler play area will also be included.

Some of the favourites will remain such as the large space net in the centre of the play area, the metal multi-play unit, multi-user rocker, and the bay of swings. The sand will also stay around the new castle unit, but a wet pour rubber surface will replace the sand under the current space net.

This new equipment has been chosen specifically to encourage imaginative social play and help children to develop sensory and motor skills with the bulk of the equipment designed to allow more children to play simultaneously; increasing play value and to help prevent queuing.

Just off Queen’s Park Road, Queen’s Park sits on the site of a former estate that was passed to Queen Victoria after the owner died without leaving a will. It was presented to Heywood by the Queen in 1878 and now features tennis courts, a BMX track, crown green bowling facilities, wetland and wildlife areas, and an on-site café.

Initial proposed designs for the play area were shared with children at St Luke’s Primary School, which sits adjacent to Queen’s Park. The design by Kompan UK, who specialise in the installation of quality play equipment, came out on top alongside Groundwork Landscapes agreed by the council and members.

The wider public also got to have their say on the council’s play area strategy, after it was sent out for public consultation earlier this year. Feedback from this has helped shape plans for all play provision across the borough, with plans in place to update further play areas.

The park’s transformation has been made possible through section 106 funding - this is money paid to the council by a landowner or developer as part of the granting of planning permission. The money from these agreements can be used to support the provision of services and infrastructure, such as highways, recreational facilities, education, health and affordable housing.

Councillor Neil Emmott, the council’s cabinet member for environment, said: “We’re delighted that we can undertake these major improvements to the main play area set in this beautiful green flag status park; which sits at the heart of Heywood’s community.

“Queen’s Park is just one of the ten green flag parks across the borough and we hope these improvements will bring joy to the many families and children who visit the park for years to come.”

Daniel Crabtree, area sales manager, Kompan UK, said: “We are delighted to be working with Rochdale Borough Council on these fabulous plans as we bring a long-standing history in high-quality play provision of over 40 years. All our equipment has a focus on child development while at the same time being great fun."

This major draw for Heywood also sits alongside other areas of investment including plans for a new garden area at the front of Heywood Civic Centre.

Working with volunteers from the Skill Mill project, who provide employment opportunities for young ex-offenders; the space will benefit from several open trees, plants, and landscaping. The gardens will enhance the entrances to the Civic Centre and Phoenix Centre - set alongside the striking benches depicting scenes from the war - providing residents with the perfect place to sit and reflect.

Queen’s Park play area is expected to be closed until mid-November.