Stroke survivor shares story to inspire hope for other patients 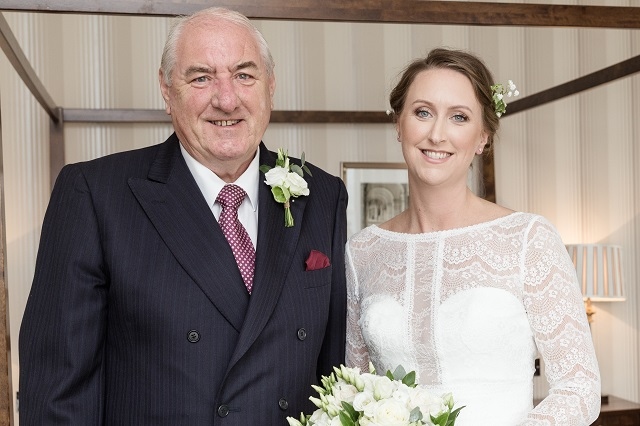 Tristan Maynard with his daughter Nichola on her wedding day

Stroke survivor Tristan Maynard from Rochdale is sharing his story to give hope to other survivors, as recent research has revealed 85% of stroke survivors are being told that their recoveries would be limited to that experienced within the first year.

Tristan, 73,  had a stroke in March 2018, which left him paralysed down his right side and completely unable to move his right arm, leg or lower back. A stroke is a devastating brain attack, which has a massive and sudden impact affecting people physically and emotionally. There is still a lot that is unknown about the brain or the way it recovers, however it can adapt and with the right support stroke survivors can go on to recover even years after their stroke.

While recovering on the stroke ward, Tristan asked the consultants and nurses about his prognosis. He said: “The consultants at Fairfield Hospital were first class, although they didn’t give me any idea of timings for my recovery which, later, I completely understand.

“However, the stroke patient next to me was recovering from his third stroke. He told me incorrectly that any progress at the end of the first month of recovery is ‘as good as you’ll get’. That motivated me and I thought I’d better make the most of the first month. I was absolutely determined to get as well as I could, as soon as I could.”

After the first month, Tristan was only able to move his little finger, however following intense physiotherapy, he was able to walk with the support of his walking stick. He was then referred to the Stroke Association’s 12 week Moving Forwards After Stroke programme, an exercise and education programme in partnership with GM Active.

Tristan set himself the goal of walking his daughter Nichola down the aisle at her wedding, without the use of a stick.

Tristan said: “After six weeks intensive therapy at home I started the programme, and found meeting other stroke survivors so helpful. From there we started the exercises and I set the goal of walking Nichola down the aisle.

“On the day itself, I was so determined with a room full of people looking at me; I didn’t want to trip up but everybody’s hard work paid off and it turned it into a pleasurable occasion. It was incredible, and a big relief.”

Eighteen months into his recovery, Tristan was still experiencing severe pain. He said: “One consultant told me I’d never get rid of the pain. I just thought ‘No chance!’ It spurred me on even more. Whether lying in your hospital bed paralysed like I was, or further into your recovery, everything the health staff say is so important.

“Stroke patients are in a very sensitive frame of mind. Fortunately what I was told gave me motivation; now, two and a half years on, I’m walking unaided and getting better every day.”

According to a survey conducted by the Stroke Association pre-Covid-19, 85% stroke survivors have reported being told that their recoveries would be limited to within the first year after their stroke.

Stroke survivors also said as a result, this has left them despairing about their recovery.

The charity is releasing these new findings as part of its Hope After Stroke campaign to highlight the importance that hope plays in people’s recovery.

More than 1,000 stroke survivors were surveyed. Other findings revealed:

The survey was carried out in August 2019 however, the charity fears the situation is likely to have worsened over lockdown.

Juliet Bouverie, Chief Executive of the Stroke Association said: “It’s shocking that so many people are told that there is a time limit to their recovery. It can be demotivating and soul destroying, when we know evidence is to the contrary. It makes our job harder but even more important.

“We know that stroke survivors cling onto even the smallest glimmer of hope. This is what powers them on to achieve what many thought would be impossible. I’ve heard so many stories of remarkable people making recoveries even 20 years after their stroke. This survey was conducted before the pandemic and while shocking then, it’s likely to have become worse as people’s fears of coronavirus and not wanting to burden the NHS overtake their hopes. Hope is the bedrock to rebuilding lives.”

Juliet continued: “Rebuilding lives after stroke is a team effort. It takes the determination of stroke survivors and carers, the generosity of supporters and the dedication of the healthcare and research communities. We connect people affected by stroke with the stroke community so they can see the possibilities for recovery. People report that our support services have been a lifeline for their recovery.  Whether it’s the Stroke Helpline, My Stroke Guide or our recently launched Here for You service, we’re determined to be there for the people who need us most.”

For more information about stroke and the vital role hope plays in rebuilding lives, visit: