You are Here: Home » News » News Headlines » Purple for polio: St Leonard's to be bathed in purple light

Purple for polio: St Leonard's to be bathed in purple light 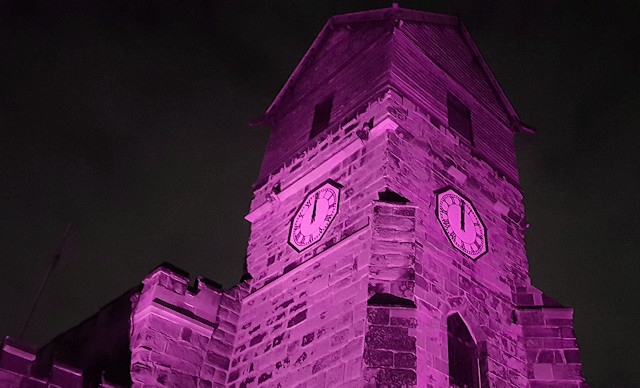 St Leonard's Parish Church will be painted purple for polio

The Parish Church of St Leonard is being lit in purple for a week by The Rotary Club of Middleton.

Joining thousands of Rotary clubs around the world in marking World Polio Day on Saturday (24 October), the church will be bathed in purple light from Thursday 22 October until Thursday 29 October.

Lee Wolf is a member of Rotary Middleton and has helped organise the event. He said: "Lighting up St. Leonard’s Middleton Parish Church purple will be a beacon; it will be seen for miles around, it will get people talking about Rotary’s mission to end polio.

"With polio nearly eradicated, Rotary and its partners must sustain this progress and continue to reach every child with the polio vaccine. Without full funding and political commitment, this paralysing disease could return to polio-free countries, putting children everywhere at risk.

The colour purple represents the colour of the dye placed on a child’s finger to show they have been immunised against the disease.

World Polio Day was established by Rotary International over a decade ago to commemorate the birth of Jonas Salk, who led the first team to develop a vaccine against poliomyelitis.

Polio is a serious viral infection that used to be common in the UK and worldwide. There is no cure for the disease, which can cause temporary or permanent paralysis, which can be life threatening.

Cases of polio in the UK fell dramatically when routine vaccination was introduced in the mid-1950s.

When Rotary and its partners launched the Global Polio Eradication Initiative more than three decades ago, polio paralysed 1,000 children every day. Great progress has been made against the disease since then. Polio cases have dropped by 99.9 percent, from 350,000 cases in 1988 in 125 countries to 33 cases of wild poliovirus in 2018 in just two countries: Afghanistan and Pakistan.

Rotary has contributed more than £1.5 billion to ending polio since 1985, including thousands of pounds donated by the Rotary Club of Middleton.