You are Here: Home » News » News Headlines » Plans for new 900-place secondary school in Middleton given the green light 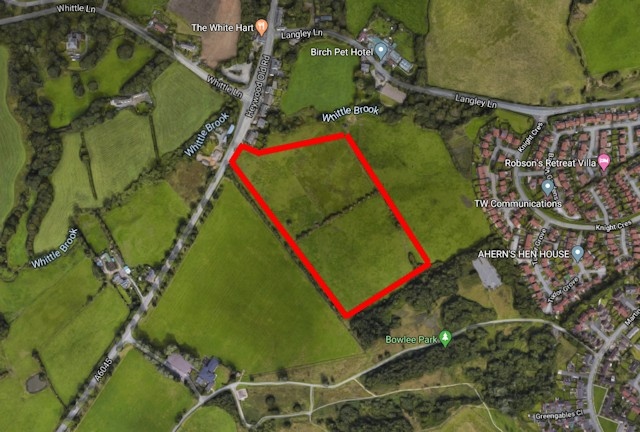 The site outline for the Edgar Wood Academy at Bowlee

Plans for an ‘urgently needed’ new 900-place secondary school in Middleton have been given the green light.

Dubbed The Edgar Wood Academy, it will be built on grazing land at Birch and Bowlee to the east of Heywood Old Road.

Rochdale council’s planning committee voted nearly unanimously in favour of the scheme after hearing the area was facing a shortfall of 138 school places by 2022.

The decision was reached despite passionate objections being made on behalf of local residents and a councillor raising serious concerns over the location.

The ‘outline’ planning permission means the school has been approved in principle, with the full details to be set out in a ‘reserved matters’ application.

Basic proposals already worked up include separate school and sports blocks of up to three storeys in height, sports courts, playing fields and social areas.

A new access road off to the site Heywood Old Road was approved by the committee on the night, however.

The scheme did not pass unopposed however.

Local residents were represented by Jillian Jones, who set out a host of objections to the plans, from the loss of wildlife habitat and ancient hedgerows, to increased congestion, drainage problems and security concerns.

Mrs Jones, from Wrigley Fold, claimed the case for the school was ‘flawed’ – citing the fact 117 places were available at schools in Middleton and Heywood at the appeals stage for the current academic year.

“All our objections for the houses being built on Langley Lane and Hollin Lane have been ignored. Every time we raise objections and explain what our concerns are it gets brushed under the carpet.

“I feel this school is going exactly the same way as the others, it will get approved and we just get ignored as local residents. All our green fields are being taken away and I just think it is appalling.”

While agreeing with other councillors that education was of paramount importance, Councillor Peter Winkler said he was not convinced the right site had been chosen.

Councillor Winkler said: “The principle is we are building on a green field site, here. It’s debatable whether it’s the right site, I’m not convinced it is, there are a lot of questions I have over this”

He added: “There are too many questions for me that have been raised over this. On principle my problem is we need to look elsewhere at a better, more suitable site to provide that good education for the children that need it.”

The majority of councillors took a different view, however.

Councillor Shah Wazir said : “We don’t want portacabins attached to existing schools offering a sub-standard education to our children. I can’t bear that. I feel the need is here, we can’t delay the decision for tomorrow, we have to meet our need today.

“I know other councillors are going to make comments, my personal view is this school is needed and I fully support the outline application.”

He was backed by Councillor Aasim Rashid who urged the committee to approve the plans.

“This is an absolutely wonderful opportunity, so why are we having a big debate on it?” He said.

“Without wasting any more time, we need to give the go-ahead so we can have a final planning application in the near future.”

His proposal was backed by all councillors bar Councillor Winker who voted against and committee chair Shakil Ahmed, who abstained.

Following the vote, however, Councillor Ahmed said the committee had made an ‘important decision’ on something that was ‘very urgently needed’.

The Edgar Wood Academy will be run by the Altus Education Partnership, which is also responsible for Rochdale Sixth Form College.

The meeting of the planning and licensing committee was held via Zoom and streamed on You Tube.