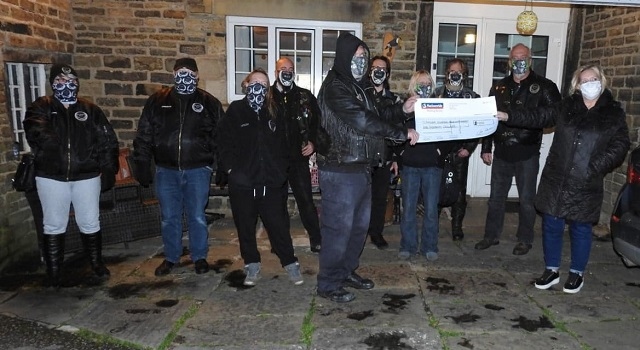 The £775 cheque was presented to the local charity, which acts as a respite for children from disadvantaged families, on Thursday (22 October), after the club joined forces with Bullets & Octane to raise money with a raffle and auction.

Having had to cancel their annual charity bike show, which for the past few years has raised money for the home, MT Heads were struggling for a way to help the Rochdale Children’s Moorland Home this year, so they reached out to their friends across the pond, who were only too happy to help.

The American rockers, generously donated personal items and exclusive merchandise to be raffled and auctioned by MT Heads.

A spokesman for MT Heads MCC said: "The Covid pandemic has had a devastating effect on people’s ability to fundraise this year and many charities are suffering as a result, so it was great that we could do our little bit. Initially, we had hoped to raise around £100, but the amazing people in the motorcycling community came through for us and, with the LA connection, we are able to donate the equivalent of $1,000 US dollars."

Bullets & Octane were due to tour the UK and Europe this year to promote their latest album, ‘Riot Rock and Roll’ and are hoping to reschedule as soon as possible – along with a visit to Rochdale Children’s Moorland Home.

Jonny Udell, via video link, said: "We are really missing being able to tour in the UK , it's great for us to be involved even though we are so far away and we would love to visit the kids’ home when we are next able to come over.”

A spokesperson for the Moorland Home, based at Nab Farm in Wardle, said: “Rochdale Children’s Moorland Home have welcomed the support from MT Heads MCC over the past two years; they have been a lifeline during difficult times. Huge thanks also goes to Bullets & Octane, for their support and we can’t wait to welcome them for a visit, next time they tour the UK.”