Tens of thousands of bees discovered at historic Hopwood Hall 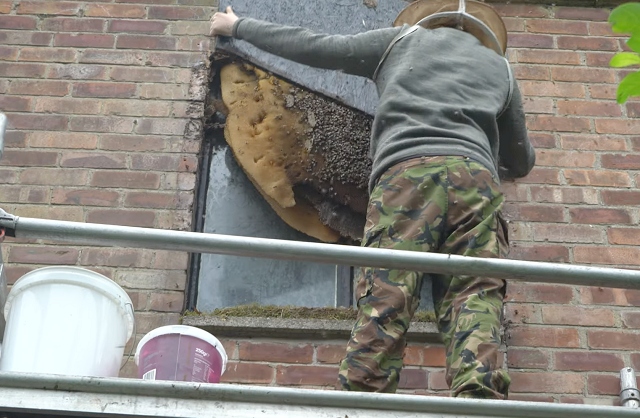 Lee with the bee colony

Tens of thousands of honey bees have been discovered at the historic Hopwood Hall in Middleton, as large bee hives were recently found behind some of the boarded up windows.

Expert beekeepers Lee and Maxine were on hand to help move the bees, estimating there were about 40-50,000 in the colony – with Hopwood DePree, who has an exclusive deal with the council to rescue the 12th century manor, admitting he is afraid of bees.

Wearing light coloured clothing – as bees can interpret darker colours as belonging to a predator – and a special beekeeper veil, Hopwood said: “I know bees are good for the world, but I have a big phobia of bees.

“We’ve got to remove them safely and carefully, without harming them.”

After removing the boards, massive pieces of honeycomb were discovered, covered by thousands of the bees. The hexagonal cells are created by the bees to store larvae, honey and nectar.

Honey bees create honey to store food over the cooler months when there are fewer flowers for them to forage from. Each bee creates around one-twelfth of a teaspoon of honey in its lifetime.

Using a ‘smoker’ to calm the bees, Lee and Maxine set about to relocate the Hopwood bees to hives with removable frames.

Smoke interferes with the bees’ sense of smell, preventing them from detecting the pheromones released to stimulate an alarm response in the rest of the hive, thus preventing the beekeeper from being attacked and stung.

Bees and other pollinators play a crucial role in food production and agriculture: they contribute the equivalent of more than £500 million a year to UK agriculture and food production, by improving crop quality and quantity, and are also vital to our wider, natural ecosystems.

The European Commission states that one in ten pollinating insects is on the verge of extinction, and a third of bee and butterfly species are declining. According to the Royal Horticulture Society, one of the biggest problems for pollinators is a lack of flowering plants, especially those packed with pollen and nectar.

Since moving to Greater Manchester in 2017, Hopwood has been making short, comedic YouTube videos of his exploits to keep his US family and friends up-to-date on progress at Hopwood Hall.

The videos have been so popular that they receive hundreds of thousands of views across social media platforms.