You are Here: Home » News » News Headlines » Break wall of silence over violence to help save lives

Break wall of silence over violence to help save lives 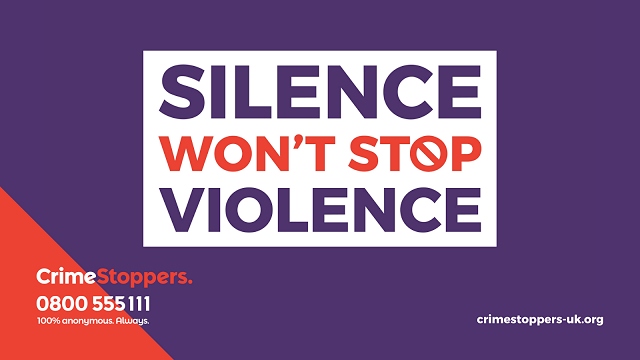 Charity Crimestoppers has launched a new campaign with a stark warning that silence won’t stop violence, urging people to speak up anonymously to help save lives.

Crimestoppers highlights a 93% rise in UK hospital admissions for knife attacks on under-16s since 2012. They also reveal that information the charity has received over the past four years about knife crime has rocketed threefold (340%), whilst firearms info has risen over the same period by a third (33%).

Whilst the health statistics are concerning, the charity notes that over half of all violent incidents are not reported to the police, which prevents them from dealing with the issue.

The ‘Silence Won’t Stop Violence’ campaign aims to break the wall of silence and help reset the status quo on violent crime. Crimestoppers’ response is to raise awareness of the impact of violence and offer individuals in communities a way to speak up about incidents, before or after they take place, 100% anonymously.

Crimestoppers is also working with a number of violence reduction units across the UK to support a public health approach to tackling violence, including promoting its youth service, Fearless.org, to give young people access to non-judgemental information and advice about crime and criminality.

Gary Murray, North West Regional Manager at the charity Crimestoppers, said: “Violence in all its forms, has a significant impact on communities in the North West and across the UK; from victims of domestic abuse, to young people carrying knives, its ripple effect can fuel the fear of crime, tear apart families, and overstretch our health service who have to deal with the resulting physical and emotional trauma.

“A public health approach recognises that violence is a preventable problem requiring a society-wide response. We’re supporting this through early intervention and education to help prevent violence happening in the first place. We recognise that you may be close to crime, but may also want to do the right thing and bring violence in your community to an end. If you know who may be carrying weapons or threatening or harming others, you can tell us 100% anonymously.”

The campaign launch coincided with the Operation Sceptre national week of action, which aims to raise awareness of the dangers of knife crime and reduce it by targeting those carrying weapons.

Officers from Greater Manchester Police have carried out weapon sweeps of local parks and open spaces, stop and search activity where appropriate, and visiting habitual knife carriers to engage and explain the dangers and consequences that can come from carrying a knife.

The force’s knife arches have been deployed at undisclosed locations targeting those carrying knives along with any other criminality during the week-long operation. 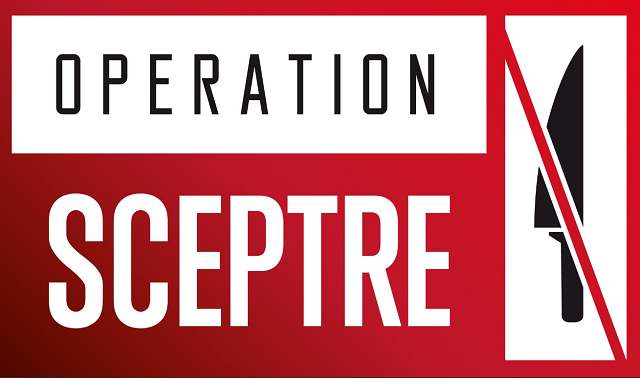 Superintendent Chris Downey, GMP's knife crime lead, said: "Even during these unprecedented and challenging times, we must ensure we're doing everything we can to reinforce the message that carrying a knife is unacceptable and that no good can come from carrying one.

"Knife crime remains a force priority, and we are committed to taking a collaborative approach to tackle knife crime across Greater Manchester. We are continuing to build on the already successful work that has been ongoing for some time through Greater Manchester Violence Reduction Unit (VRU).

"The work of the VRU is part of the wider approach to tackle knife crime and violent crime, such as making sure victims receive the right support, improving the criminal justice response to all forms of serious violence, engaging with schools to increase awareness of the consequences of getting involved in violent crime, identifying and working with young people at risk of violent crime, and developing a community-led approach to prevention and early intervention.

"A large part of our work is out in our communities with young people, educating them on the impact knives can have not just on individuals, but on families and communities. Even though we will be engaging with young people throughout the week, unfortunately this year due to Covid-19 restrictions, some of our intended work has had to be scaled back.

"With this, I am asking parents, guardians and extended family members, to talk to your young family members about knife crime as you can all play a vital role in preventing them from becoming involved with knife crime. We advise you to try to talk to them openly about the dangers, as well as the life-changing consequences that come from carrying a knife.

"We have some simple advice to help you have the conversation. Firstly, establish the most appropriate time and setting to have an open conversation about knife crime; it should be somewhere that you both feel comfortable.

"Be aware that a young person may be reluctant to talk to you about knife crime, so reassure them that they can be honest with you, as well as letting them know that you’ll listen to what they have to say and support them without judgement.

"You should encourage them to share their fears and worries around knife crime. We know that fear and a feeling of vulnerability is often the reason behind people carrying knives. Many young people do so because they are afraid for their own safety and they believe a knife will protect them. So it's important that they realise, that the chances of becoming a victim of knife crime increases just by carrying one. Sharing your own fears can also help, as this can help them open up.

"It's important to highlight that vast majority of young people don’t carry a knife as they do not give you protection, and it's not acceptable. Let them know that they do have a choice when it comes to carrying a knife, even though it may seem to them like they don’t.

"Encourage them to consider who they’d be affecting if they get involved in knife crime and what consequences can come from it, such as being expelled from school, being sent to prison or even worse, someone tragically losing their life. Also reiterate to walk away from a dangerous situation.

"Finally, explain that they can always report their concerns about anyone carrying a knife anonymously through CrimeStoppers.

"You may hear some upsetting and concerning things about what your child, and even their friends may be involved in, but try not to get upset or overreact as you don't have to deal with this on your own.”

To find out more about the Silence Won’t Stop Violence campaign, visit the campaign page.

If you have information about violent crime, including knife crime, call freephone 0800 111 555 or fill in the anonymous online form at Crimestoppers-uk.org.

If you have concerns about someone you know or care about who is carrying or hiding a knife, or if you are aware that knives are being concealed in your community, you can call the police on 101 or talk via LiveChat at www.gmp.police.uk.

Always dial 999 in an emergency.