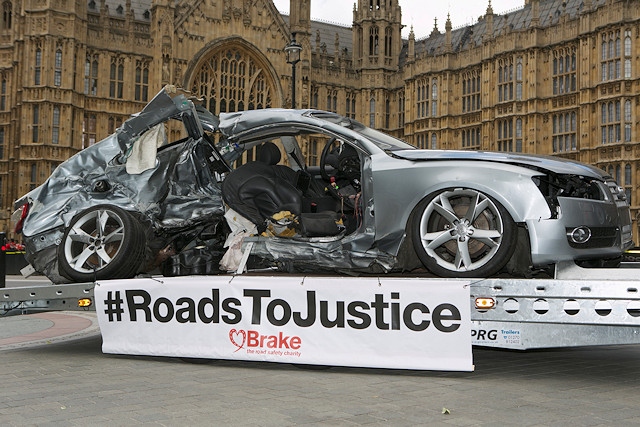 As charity Brake hosts its latest road safety initiative, Greater Manchester’s emergency services are reminding people about the dangers they are faced with when using the roads.

The stark reminder comes as figures from Greater Manchester Police reveal that between March and September 2020, compared to the same time in 2019, the number of fatal casualties in Greater Manchester has increased by 29% – from 24 to 31.

‘No Need to Speed’ is the focus for Brake’s Road Safety Week (16-20 November), encouraging organisations and communities across the UK to raise awareness of speeding on the roads and the consequences that all too often come with speeding – such as the tragic deaths of Joseph Brown-Lartey and Chloe Cockton.

Both Joseph and Chloe were tragically killed in car accidents involving speeding on Bury Road in Rochdale.

Joseph, 25, was killed in November 2014 when an unlicensed and uninsured driver sped through a red light and smashed into his car at the junction of Bury Road and Sandy Lane. The driver was doing 80mph in a 30 zone, before smashing into Joseph’s car and splitting it into two.

16-year-old Chloe was killed in July 2016 when the car she was a passenger in crashed at the junction of Bury Road and Mellor Street. Witnesses reported seeing the car travelling between 60mph and 70mph before it rolled and collided with a pedestrian barrier on the opposite side of the carriageway.

In 2016, the wreckage of Joseph’s car was paraded past Parliament as part of the launch of Brake’s ‘Roads to Justice’ campaign – calling for stiffer sentences for dangerous drivers.

Greater Manchester Fire and Rescue Service’s Head of Prevention, Area Manager Paul Duggan, said: “Our firefighters are called to hundreds of road traffic collisions every year and all too often witness people suffering preventable life-changing injuries, or losing loved ones, as a result of distractions while behind the wheel and speeding.

“We now deal with more collisions than we do house fires, so continually work with our partners, and charities such as Brake, to do all we can to keep people safe on our roads – whether that be pedestrians, those driving, or those who cycle or ride motorbikes.

“Our advice is to slow down and stay safe – speed kills.”

“In 2019 more than 60 families lost a loved one on our roads – with a further 600 people suffering serious and often life-changing injuries. In the last six months of this year a further 31 people have died unnecessarily. This is just so tragic and heart-breaking for everyone involved.

“Collisions often occur because of distractions such as speeding, so when you are behind the wheel please do think about others, yourself and your family and friends – lives are often wrecked beyond repair and the consequences last a life-time.”

Chief Inspector Matt Bailey-Smith, Greater Manchester Police, said: “Speed limits are there for a reason. Not only do excessive speeds increase the chances of driver error and time it takes for the vehicle to stop, but higher speeds also increase the fatality rate for pedestrians who may be involved in a collision with that vehicle. That's why we are support the Brake's Road Safety Week's message – No Need to Speed.

"Throughout the week of action we will be focusing on those roads and areas that the statistics show have the highest threat and where the public are most at risk, however, it is important to note that our officers routinely patrol the roads of Greater Manchester taking appropriate action against those who drive above the speed limit or dangerously, in order to keep people safe.

"I would also like to thank the majority of responsible road users who do abide by the speed limit and remind those that don't, that even though the roads may seem quieter during the current lockdown, that those small increases in speed can add up to big risks and have devastating consequences, for vulnerable road users in particular, please don't take the chance."

Dan Smith, North West Ambulance Service Head of Service for Greater Manchester said: “Each year, we see many devastating injuries and sadly a number of deaths as a result of road traffic collisions, many of which could be avoided.

“Brake Charity has found that speed contributes to one in five fatal crashes in the UK, and this Road Safety Week we’re calling on drivers to take action and curb their speed to help reduce the number of collisions.

“A split-second lapse of judgement behind the wheel really can mean the difference between life and death – slow down and save lives.”

You can find more information about staying safe on the roads here.

Do you know your stopping distances when travelling at different speeds while behind the wheel driving? Take Brake’s test now.