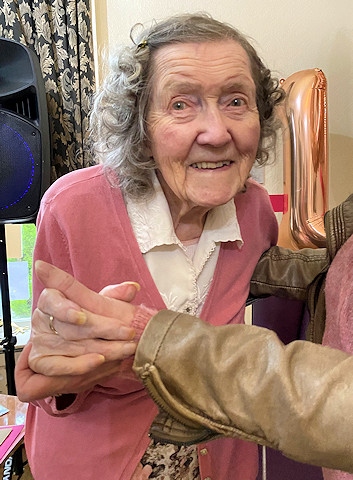 To celebrate the occasion, staff and residents at the home in Heywood organised a party with giant 108 balloons, three birthday cakes and a bottle of champagne.

Sylvia also received her annual birthday card from the Queen, who sends a free birthday message on a person's 100th birthday then each year following a 105th birthday, to which Sylvia humorously responded, 'I've got enough'.

Sylvia's nieces and nephews were able to observe the special day through a socially distanced window visit.

Gaynor Wright, manager of Highfield House, said: “This was a very special birthday for one of our beautiful ladies. Sylvia came to live at Highfield House earlier this year and settled into her new home straight away. She loves walking with a care assistant and singing opera for everyone.

"Our staff came in on their days off as nobody wanted to miss her special day. We all had an absolutely lovely time and sang happy birthday to Sylvia as she wore her birthday girl sash.

"I would like to thank all my fantastic staff for making the day so special and to our singing chef, Mark, who provided entertainment so the residents could have a dance. However, Sylvia was more bothered about making sure her hair was still curly!

Sylvia Annie Cissie was born on 21 November 1912 in Shenstone, Staffordshire to her parents, Mary and Thomas Aston. She had a younger brother, Tommy, and a sister, Rhoda, and the family ran the village grocery store and bakery. They delivered by horse and trap [carriage] to local villages.

When Sylvia left the local private school, she travelled daily by train from Shenstone to Birmingham where she worked as a typist. When World War Two begun, her career changed and she worked for British Motor Company, who by now were building tanks for the forces.

At the end of the war, she commenced work at The Post Office, up until her retirement in 1972 (aged 60).

Sylvia married Douglas Corfield on 20 September 1947 at Shenstone Parish Church. Douglas was referred to as Sylvia’s ‘toy boy’ as he was over ten years her junior.

As Sylvia and Douglas had no relatives in Birmingham where they lived together, Sylvia looked on her cousin in Rochdale and upon retirement, the couple moved north to the town where they loved the social life and dancing.

In later years, Sylvia’s eyesight has failed and so she became a member at Rochdale Blind Society, of which she attended up until 2019. She loved the chats and dancing but complained that there were only two men to dance with, who she says would ‘fight one another to dance with her’.

Since Douglas’ death, Sylvia lived alone very independently until the end of last year, when it became difficult. After a few short stays in hospital, Sylvia arrived at Highfield House in Heywood, initially for respite, but decided she liked being there. When asked by her social worker about going home or staying, Sylvia decided to stay at Highfield, where she has officially lived since January 2020.

The social worker also asked Sylvia what the food was like at Highfield, to which Sylvia replied: "It’s good, but it’s not The Ritz!"