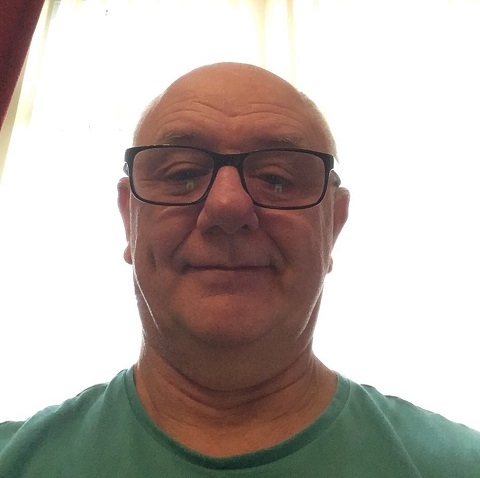 Taxi driver Alan, 64, had his stroke in May 2019. He said: “I tripped and bumped my head while I was at work. Two days later I was at home with Heidi and she instantly recognised I was having a stroke. I had no idea, I was well out of it, but my mouth had dropped on one side.

Alan had to give up his job but was determined to get active from the outset.

Initially he had to use a hoist to transfer to and from his bed, then set himself goals. At the beginning these were small targets, such as walking in the living room, which progressed to walking up the stairs and walking outside.

Alan was referred to the Stroke Association’s Moving Forward After Stroke Programme, a weekly exercise and education programme in partnership with GM Active.

Alan said: “It has been brilliant. Although all the advice and encouragement is very helpful, the biggest benefit for me was getting into a routine. My days fly by and if I’m not careful, I could end up doing nothing. Now I have a sensation all the way down my left hand side and can’t feel my foot, knee or elbow. My brain can tell my left side what to do and it will move but I can’t feel a thing. Although I can walk the steps, my walk is a bit robotic. My balance on my left hand side is also affected.”

During lockdown Alan signed up for the Stroke Association’s weekly online exercise sessions on Zoom. He is now swimming three times a week and has just completed a challenge set by Rochdale Leisure Centre which was a target of creating a record for the amount of steps completed in the month of September. Alan exceeded 10,000 steps in one day.

He said: “Somebody said to me three months ago: ‘exercise, exercise, exercise’. I’ve tried to follow this as much as I can. I’ve gone from being hoisted into my own bed, to walking and where I am now.”

Alan knows how important hope is for stroke recovery. He added: “While I was in the stroke ward it shocked me how some men react to having a stroke. They had completely given up.

“Seeing those men made me realise how lucky I am, and while it shocked me, it motivated me to get better. “

He added: “I realised it’s talking to other people that gives me hope. I need someone to bounce off, whether a stroke patient, physiotherapist, a friend or a neighbour; I need that connection. That keeps me positive.

“I also used the Stroke Association’s My Stroke Guide, where I could hear other people’s stories which gave me a glimmer of hope. You could think this is as good as it gets, I’ll be like this for the rest of my life. But seeing other people’s recoveries gave me hope for my future.

“I’d like to go back to the ward and speak to stroke patients to give them hope and tell them not to give up. I know I can’t promise that they’ll get better and everything is going to be alright, but it’s that motivation that’s so important. You have to keep hopeful.”

Alan is asking people to make a donation to the Stroke Association’s work supporting survivors and their families, as they rebuild their lives this Christmas.

Kate Charles, Director at the Stroke Association, said: “When someone’s life has been shattered by stroke, they may feel all hope is gone. But we also know that stroke survivors cling onto even the smallest glimmer of hope. This is what powers them on to achieve what many thought would be impossible. I’ve heard so many stories of remarkable people making recoveries even 20 years after their stroke.”

The charity estimates that there are 4,600 people living with the effects of stroke in Rochdale, Heywood and Middleton while around 100,00 people have a stroke in the UK every year.

Kate added: “Many people in our support services have praised the support they received from the Stroke Association, to build on that first glimmer of hope so that they could rebuild their lives after stroke.

“Hope might be found in a call to our Helpline; through the friendship and support of our online community; or the ongoing support of our Stroke Association Support Coordinators. Rebuilding lives is impossible without hope.”

To donate or for more information about stroke and the vital role that hope plays in stroke recovery and rebuilding lives, please visit www.stroke.org.uk/hope