New industrial units on the way for former brownfield site 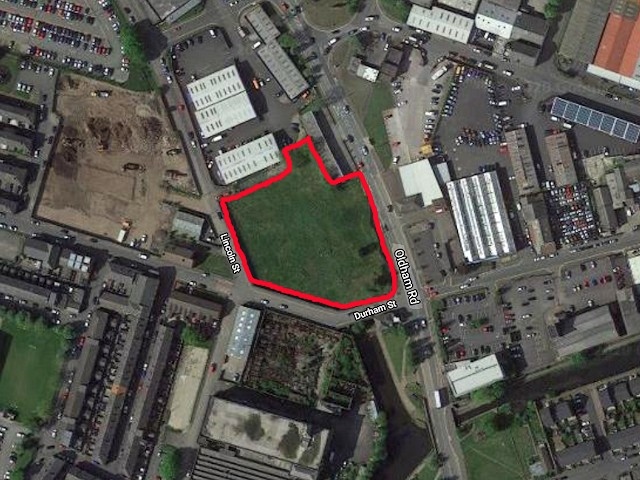 The site off Lincoln Street, Rochdale

Thirteen new industrial units are being planned for the former Bradfern factory site off Oldham Road in Rochdale as the council has reached full capacity of its existing units.

Rochdale Development Agency is now tendering for work to begin, after planning for the new units at the Lincoln Close Industrial Estate was granted in March 2020, subject to conditions.

The site was most recently occupied by Bradfern Limited, which manufactured hospital furniture between 1993 and 2009. The site was then bought by Rochdale Development Agency and is now owned by the council.

Councillor John Blundell, cabinet member for regeneration, business, skills and employment at Rochdale Borough Council, says the borough has been getting calls on a daily basis from companies looking for space in Rochdale.

Councillor Blundell said: “They’re all occupied and there’s a massive demand for units at the moment. We saw a lot of interest, particularly over the lockdown period, from logistics companies and businesses that are expanding.

“We haven’t lost a single tenant due to Covid-19. We’ve had a couple of tenants deciding to retire but these units have been re let immediately.

“We’ve got a pipeline of about £20m worth of projects coming forward across various sites in the borough.”

He said the rent collection for the last quarter to the end of September was 95 per cent.

The council’s portfolio of 118 industrial units is at full occupancy – with a waiting list of businesses wanting to move into the borough. The portfolio across 10 estates total 172,000 sq ft  of commercial space.

Councillor Blundell added: “Our occupants range from SMEs to sole traders. Rochdale’s resilience has shone through during Covid-19. Businesses have continued to trade through the pandemic. A lot of them are online businesses, which has helped.”

One of newest arrivals to the borough is D&G Utilities, which moved into Rochdale Council's Logic development at Kingsway Business Park.

Managing director Richard Bennett said: “Our headquarters are in Rotherham but we were attracted to the high existing skillset in Rochdale and we felt we could tap into it. We’re right next to the M62 and we can manufacture from this site. It’s perfect for us.”

Bob Neave, of Bob’s Biltong, has two units at Phoenix Close Industrial Estate in Heywood with a third one undergoing a fit-out.

He said: “We came to the UK nearly 20 years ago from South Africa and settled in Rochdale. I started Bob’s Biltong from my house but as it grew I took on industrial space and found Rochdale was the perfect place to base my business. We currently have six staff but have plans to grow further.”

There are no listed buildings or structures on the Bradfern site, although the bridge carrying Durham Street over the former Rochdale Branch Arm at the south of the site has some historical and conservation merit. It does not however, have listed status.

Prior to Bradfern, the land was occupied by two Victorian mills, believed to have been demolished in the 1990s, separated by a now-infilled part of the Rochdale branch canal, which was in use from the 1790s and officially abandoned in 1952.

It originally left the main line of the Rochdale Canal before Lock 50, ran parallel with Oldham Road (under what is now Halfpenny Bridge Industrial Estate) to where it terminated in wharves near Drake Street, where Central Retail Park now sits, formerly occupied by MFI and currently occupied by Halfords, Argos, Matalan and Poundstretcher.

Plans are also in the pipeline to redevelop Central Retail Park.

Rarely used after the 1920s, the branch declined with the main canal and was filled in during the 1960s. Just one small section remains, between Lock 50 at Oldham Road to Durham Street, a memory of the now-demolished mills the branch canal used to serve.

A campaign to restore the infilled branch canal wishes to see the area regenerated like the Castlefield Basin in Manchester but this looks extremely unlikely to be successful.

Read more: Restoring Rochdale Branch Canal could be "once in lifetime opportunity"Published: 04 August 2020