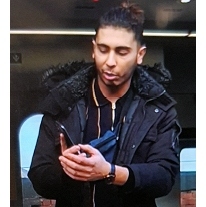 British Transport Police is today (26 November) releasing a CCTV image following a report of an assault at Rochdale railway station.

The incident happened at 9.40am on Monday 9 November.

A man is reported to have punched a train guard then pushed a train driver after being asked to wear a face covering.

Officers would like to speak to the man in the image who may have information that could help their investigation.